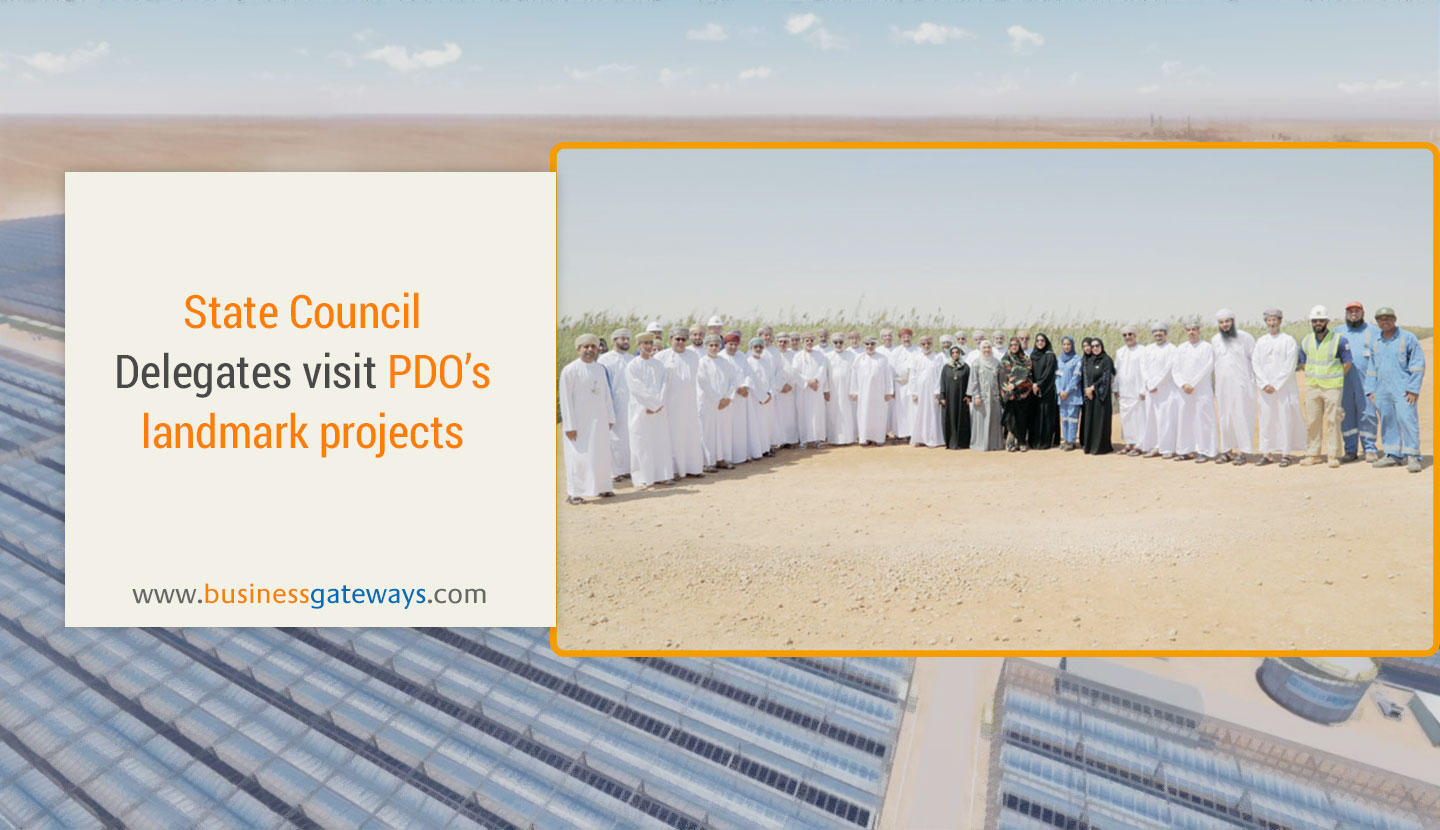 Petroleum Development Oman (PDO) yesterday hosted a delegation from the Majlis Addawla (State Council) on an official visit to two of its leading, energy-saving projects in the South of its concession area.

The eminent group was led by Dr Yahya bin Mahfoodh al Mantheri, Chairman of the State Council, and included around 30 of its members.

The fact-finding mission toured Miraah, one of the largest solar energy ventures globally, which PDO is building to produce steam for thermal enhanced oil recovery by harnessing the power of the sun through a huge glasshouse complex to heat water.

The project, which is being developed in partnership with GlassPoint Solar, has recently seen the completion of the construction of its first block.
This is on schedule and on budget. When finished, Miraah will deliver 1,021 megawatts (MW) of peak thermal energy, generate 6,000 tonnes of steam per day for oil production and save 5.6 trillion British Thermal Units of natural gas a year. It is also expected to reduce carbon dioxide emissions by over 300,000 tonnes annually.

The delegation also visited the award-winning Nimr Reed Beds project, the largest industrial constructed wetland system in the world. The project, which PDO is running with partner Bauer Nimr LLC, has enabled the Company to treat massive volumes of Nimr oilfield produced water efficiently and effectively.

By avoiding the conventional, energy-intensive disposal method of pumping water into deep aquifers under high pressure, the scheme is forecast to save around 24 billion cubic feet of gas over 10 years - a 98 per cent saving. During the full day official engagement, the guests also toured the Marmul central control room and hi-tech Collaborative Work Environment centre, which featured a live broadcast from the field with Coastal staff.

Both Miraah and the Nimr Reed Beds mark PDO as a global pioneer in oil and gas innovation, and their positive environmental impact confirm the Company's care for the environment.

"It was a pleasure to see such ambitious projects which will promote advancement in the country, for bigger companies need to set an example in this regard during this time. We wish PDO all the best and hope it continues its achievements to boost the national economy."

PDO Managing Director Raoul Restucci said: "PDO was honoured to receive our guests and give them a tour of some of our most notable projects.

We are beginning the transition to becoming a fully-fledged energy and water management company with a greater emphasis on renewables and Miraah and the Nimr Reed Beds show the scale of ambition.

"These projects are sustainability showpieces, and are an example of how we are adapting to the current tough economic challenges through greater efficiency, excellence and value creation.

"Both use innovative technologies which could help turn the Sultanate into a centre of excellence for renewable energy efficiency creating new opportunities in supply chain development, manufacturing capability and employment and training for Omanis."