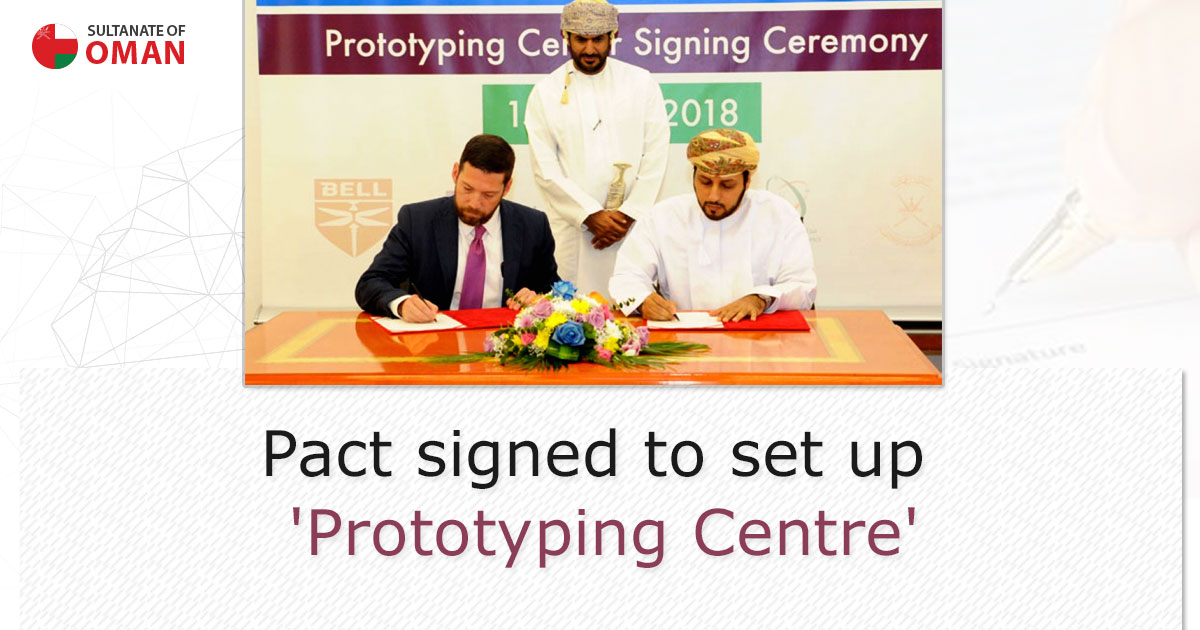 The Omani Authority for Partnership for Development (OAPFD) signed a contract with the US Bell Company for the implementation of the "Prototyping Centre" project.

The centre will support Oman's innovation and industry system, transfer of knowledge, enhance research and development studies, promote new technologies, train Omani researchers to transform ideas, scientific research, innovation and industrial products into experimental products and prototypes usable on the ground and the establishment of institutions capable of entering the labour market efficiently and is considered one of the integrated centres.

The agreement signed between OAPFD and American Bell states that the company will establish an equipped and integrated centre, consisting of manufacturing workshops, specialised laboratories and a number of modern studios furnished with the latest equipment and technologies that enable the centre's users from small and medium enterprises, industrial institutions, various research centres, university students, colleges and various training institutes, from turning ideas and innovations into live models that can be manufactured on the ground.

The centre will also contribute to the transfer of the international expertise and practices in the field of innovation and modelling to the Sultanate, as well as its role in supporting and upgrading Omani-registered intellectual property, and establishing small and medium enterprises.

Al Shanfari said that economic diversification and the promotion of different and promising sectors in the Sultanate is a key objective for OAPFD, and the prototyping centre follows the Sultanate's orientations to promote the culture of innovation in the Sultanate and create an integrated environment to support innovators, whether individuals or institutions.

He expressed his happiness with this strategic partnership with Bell and the TechShop Company, which is implementing the project, which proves that the Sultanate is an attractive investment destination and has a rich environment for innovations and that Omani innovations are worth investing in.

"We are delighted to partner with the Sultanate to establish the Centre for Prototyping and Innovation, which will help innovators and SME owners, Volmer said.

During the foundation phase of the centre, the training and qualification of the Omani cadres will be supervised by the US Tech Shop International, a leading innovator in the management and operation of innovation and modelling centres around the world, which will have a close partnership with American Bell, to qualify Omani cadres in the management and operation of the centre through the use of modern devices and technologies in the centre and ways to develop ideas and innovations of science.

OAPFD also signed a cooperation programme with the Research Council (TRC) to establish and implement the centre at the Muscat Innovation Park.

According to the programme signed between OAPFD and TRC, the center will be located on the campus of the Muscat Innovation Park as part of the facilities hosted by the complex, which will be equipped by Bell, as part of its commitment to OAPFD as part of Partnership for Development Programme.

A Hinai, TRC Secretary General explained that the cooperation agreement comes in line with efforts to harmonise efforts to achieve transformation towards knowledge based economy.

He expressed his happiness to reveal the preparation and equipping of a modeling centre in the complex, to achieve the objectives in creating an integrated research environment, advanced scientific factors that facilitate the work of entrepreneurs and owners of small and medium enterprises, and to achieve leadership through the improvement and development of ideas, in the light of rapid changes in the world, and to strengthen the position of the Sultanate to become one of the leading countries in the field of innovation.

The Muscat Innovation Park is the most prominent national scientific initiative, implemented by TRC, as a building to be constructed In Al Khoudh area, on a land area of (540) thousand square meters dedicated to research and innovation, and support to new programs and SME's, service providers and consultants interested in driving innovation in four sectors: water, environment, energy, renewable energy, food and biotechnology, and health sciences.