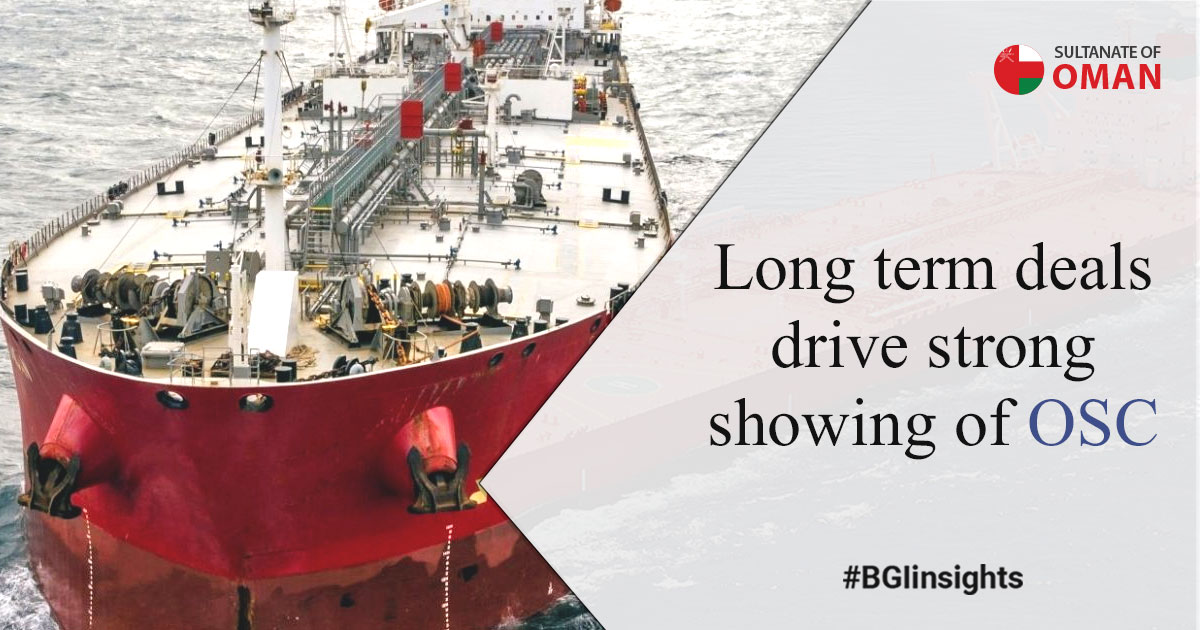 OSC’s growth in the region is being driven by a 20-year contract to transport condensate for Orpic and a 15-year deal transporting methanol for OTI from the Salalah Methanol plant.

The company is further supporting the export of LPG from Sohar Refinery to Yemen, Sudan, India, Bangladesh and Sri Lanka. It comes shortly after OSC reported significant progress with a new VLCC spot chartering desk securing more than 100 fixtures with world leading oil majors in its first 12 months of operation.

“Being the national carrier, OSC caters to the needs of the Omani industry for the carriage of a wide range of products including condensate, methanol and LPG,” he said.

“As part of our long-term contract with ORPIC, we have deployed two chemical carriers along the coast of Oman. One is a condensate carrier load on average 10,000 cubic metres of condensate from Qalhat in Sur and discharge the product for use in refineries including Mina Al Fahal in Muscat and Sohar. The second carrier is transporting refined products (Mogas 91, Mogas 95 & Gas Oil, Jet Fuel) loading from Sohar and discharge in Salalah. ORPIC’s refineries, aromatics and polypropylene production plants produce condensate, chemicals, plastics and other petroleum products for domestic use, as well as export for other countries as well,” he added.

“Within the domestic product segment, OSC is also responsible for the transportation of half-a-million tonnes of methanol from Salalah Methanol Company. This is a standalone plant designed to produce methanol of Federal AA and IMPC grade. OSC’s contract involves the long-term charter of two dedicated methanol tankers to OTI, responsible for marketing the product globally. The average quantity of methanol being transported is around 40,000 metric tonnes per vessel, with OSC discharging mostly to China and Europe,” he said.

“Meanwhile, OSC is also exporting LPG from Sohar Refinery to neighboring countries through two dedicated small pressurised LPG carriers. This involves the transportation of 3,850 metric tonnes per vessel on average to the Middle East market, as well as Africa and Asia,” Mohapatra said.

Mohapatra said the domestic growth is being supported by the new VLCC chartering desk, which has concluded more than 110 fixtures with a total of 24 charterers and more than 15 brokerage companies. This includes new contracts with oil majors including Reliance, Essar, BP, GS Caltex, S-Oil, Indian Oil, Hyundai Glovis and Kuwait Petroleum etc, and traders such as Trafigura, ST Shipping, OTI and Socar.

“Our commercial chartering desk is now in its second year of operation after we took full commercial control of our VLCC fleet in March 2017,” he said.

“As part of our new strategy, we signed a Contract of Affreightment with Shell International Eastern Trading Company, a Shell subsidiary, for a period of three years. This gave us a substantial cargo base for the entire fleet to kickstart the operation. The vessels are technically managed by Oman Ship Management Company, based in the same office as OCC, which enables us to operate a fast, efficient and coordinated operation for clients," he added.

“It is our long and medium-term contracts with the likes of ORPIC, OTI and Shell, which provide us with a steady cash flow to invest and expand our fleet further, and we believe OSC is very well placed to capitalise on growth opportunities which lie ahead in both the domestic and international sectors,” he said.