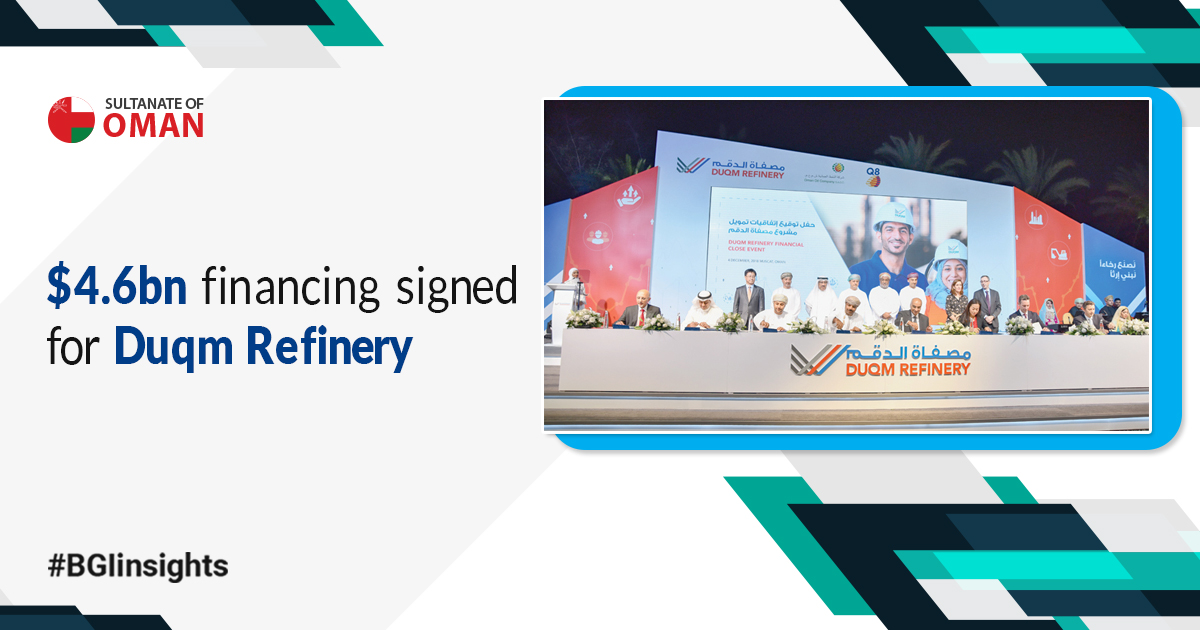 Duqm Refinery announced its project’s financial close at a gala dinner held at the Intercontinental Hotel Muscat. Achieving a multi-source project financing for the Duqm Refinery project was a major milestone for the project.

Speaking on the occasion, the President of Kuwait Petroleum International and Chairman of Duqm Refinery, Nabil Bourisli, said: This achievement reflects the strength and stability of the Omani and Kuwaiti economies.

It also reflects the trust and confidence of local, regional and international financial institutions in our economic ties that are deeply rooted in history. He added, “Our Vision is aiming at maximizing the value of our natural resources and driving the two countries toward expanding their economic potential that leads to balanced economic growth.”

Eng Hilal al Kharusi, Vice Chairman of Board of Directors of Duqm Refinery, commented on the occasion: “This is indeed a very important milestone for the project. It reflects the trust that financial institutions have placed in the project which with no doubt will be one of the key economic drivers for SEZAD. He further added, “Setting up Duqm Refinery and Petrochemical Industries Company is an important milestone for petrochemical industries and key to establishing new downstream industries and the creation of job opportunities.”

Eng Khalid al Mushaileh, Vice President of Kuwait Petroleum International, stated: “Kuwaiti banks were effectively involved in financing the project achieving 32 per cent of the total loan amount. This is driven by the importance of the project as well as the strategic partnership between the two brotherly countries.”

He added, “This project is in line with Kuwait Petroleum Corporation 2040 strategy and it is at the same time a great opportunity to involve skilled Kuwaiti workforce to be part of these external investments.”

“The $4.6 billion multi-sourced financing signed for the project is not only the largest project financing in the Sultanate of Oman, it also includes the largest sharia compliant facility awarded to a green field project in the country provided by a consortium of Islamic financing institutions,” said Mubarak al Naamany, Chief Financial Officer of Duqm Refinery.
He further stated, “Facilities have been provided by 29 reputed financial institutions from 13 countries and guarantees from 3 major ECAs. He concluded that achieving a Debt to Equity ratio of 55 per cent with uncovered facilities of 70 per cent of total debt, is a testament of confidence placed by international, regional and local lenders on the Sultanate of Oman, the shareholders, and the project.”