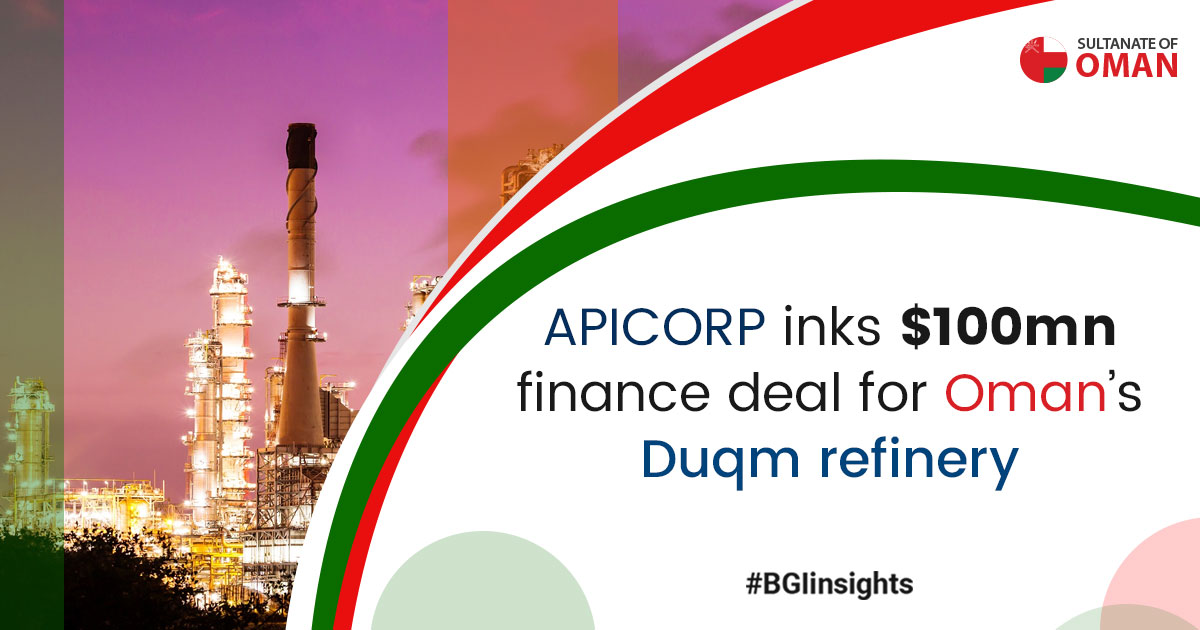 The Arab Petroleum Investments Corporation (Apicorp), a multilateral development bank, has announced a $100 million investment as part of a consortium of international and regional banks to finance the construction of the Duqm Refinery in Oman’s Wusta Governorate. Situated within the Duqm Special Economic Zone, the refinery is a joint venture between Kuwait Petroleum International and Oman Oil Company. Duqm Refinery is a milestone project which will contribute to the transformation of Oman’s economy.

Apicorp’s contribution to the refinery project includes $50 million as sharia compliant finance, while the other $50 million is in conventional tranche.

The announcement continues the Arab multilateral bank’s collaboration with Kuwait, a 17 per cent shareholder in Apicorp, with a continued partnership in the financing of foreign investments in petrochemical projects such as MEGlobal in Canada and the Netherlands, and for Equipolymers in Switzerland, as well as the Nghi Son refinery and petrochemical plant in Vietnam.

This is also a demonstration of Apicorp’s commitment to Oman with over $380 million currently committed to the energy sector in country, said a top official.

“We are delighted to be working with Kuwait Petroleum International and Oman Oil Company on this prestigious project — Duqm Refinery. As the Arab energy sectors most trusted financial partner, we look forward to further strengthening our existing partnerships with the governments of Kuwait and Oman,” remarked Apicorp CEO Dr Ahmed Ali Attiga.

“Once operational, the refinery will play a significant role in boosting Oman’s exports and will be a key driver for the growth of the region providing investment opportunities for new related projects,” he stated.

Nabil Bourisli, the president of Kuwait Petroleum International and chairman of Duqm Refinery, expressed delight at the collaboration with Apicorp on Duqm Refinery. “This reflects the trust and confidence of local, regional and international financial institutions in our economic ties that are deeply rooted in history. Our vision is aiming at maximizing the value of our natural resources and driving the two countries towards expanding their economic potential, leading to balanced economic growth,” he added.
Duqm Refinery recently celebrated the laying of the foundation stone and the commencement of the $5.75 billion construction work for the project.