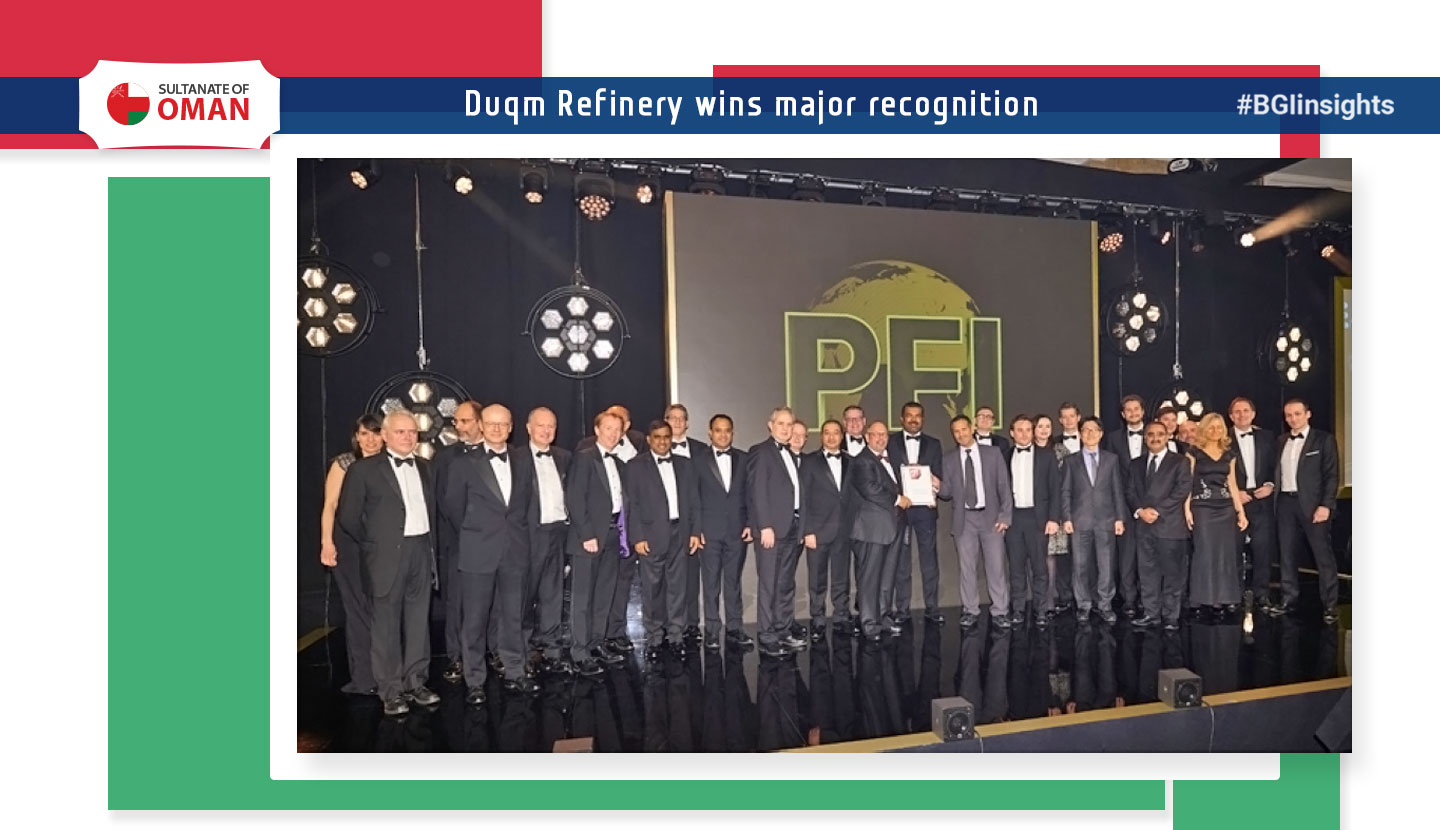 Duqm Refinery’s financing of US$4.6 billion is considered a major project deal in the Gulf region. The Refinery project was recognised by Project Finance International (PFI) at a gala awards ceremony held in London last week where it won the “Middle East Petrochemical deal of the year’.

The PFI Awards event is considered to be the most prestigious event in the global project finance calendar and it sees over 900 of the World’s most senior and successful finance professionals gather to celebrate industry excellence.

“Achieving financial close and winning this award is a recognition of several ‘firsts’ that the project has delivered on” said CEO of Duqm Refinery, Dr Salim Al Huthaili.

“This is not only the first cross border project in the Gulf region, but also the first where two government owned oil companies are partnering on such an initiative,” he further added.

Mubarak Al Naamany, Chief Financial Officer, Duqm Refinery said: “The multi-sourced financing signed for the project is not only the largest project financing in the Sultanate of Oman, it also includes the largest sharia-compliant facility awarded to a green field project in the country provided by a consortium of Islamic financing institutions.”

“Facilities have been provided by 29 reputed financial institutions from 13 countries and guarantees from 3 major Export Credit Agencies (ECAs),” he further added.

On behalf of Duqm Refinery, the award was received by its Project Director, Jacobus Nieuwenhuijze, who stated at the occasion: “We are grateful for the recognition for the hard work done by our teams and for achieving this important milestone.”

Duqm Refinery and Petrochemical Industries is a joint venture between Oman Oil Company and Kuwait Petroleum International. The project is located in Duqm, Al Wusta Governorate, on the southeast coast of Oman. With close proximity to the Arabian Sea and the Indian Ocean, the Refinery project is strategically located with direct access to international shipping lines that connects markets East and West.

With aims of establishing itself as a world-class refinery, Duqm Refinery is a catalyst for economic growth and will contribute to the future prosperity of the Sultanate.

On completion of the Duqm Refinery project, it will have the capacity to refine 230,000 barrels of crude oil per day using various blends.Diesel, jet fuel, naphtha and liquefied petroleum gas (LPG) will be the main products of the refinery.

Located in the Special Economic Zone of Duqm, the refinery project will serve as a key driver for growth in the region, encouraging investment opportunities for new projects that would interface with the refinery's operations.

Post award of a ‘notice to proceed’ to contractors, Duqm Refinery recently celebrated its financial close. It signifies the trust and confidence that international lenders have on the Refinery project.

Also Bank Sohar, Bank Muscat, Ahli Bank and National Bank of Oman are some of the local banks have committed facilities to the project.