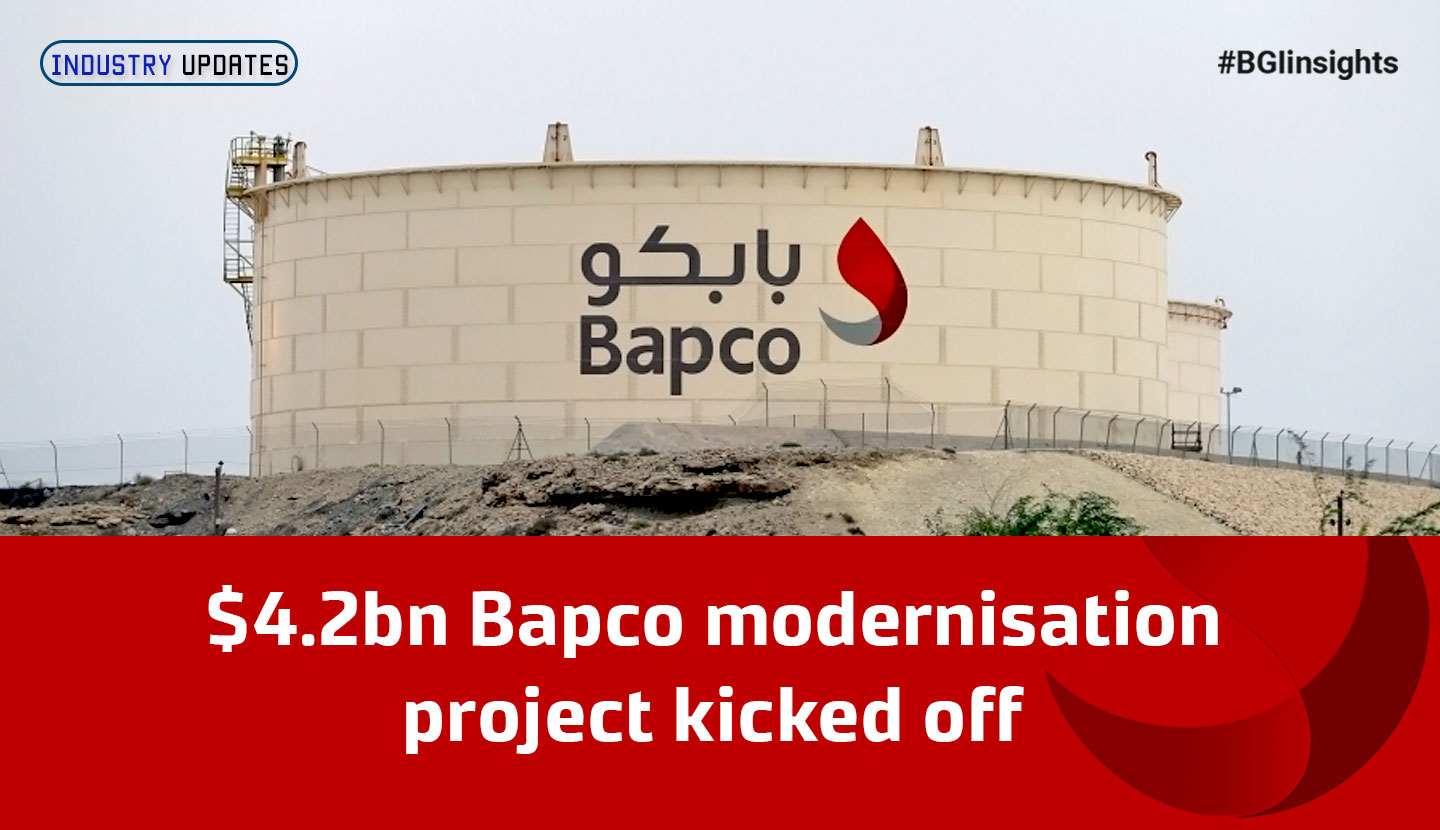 The foundation stone for the modernisation project of Bahrain Petroleum Company (Bapco) refinery, considered to be the biggest industrial project in the history of Bahrain, was laid yesterday (March 5).

During a celebration held in Awali, HRH the Premier underlined the government's resolve to fast track the kingdom's development by supporting giant ventures aimed at serving the industrial sector.

He underscored the importance of Bapco refinery modernisation project as one of the major national ventures aimed at developing the oil industry infrastructure and supporting the national economy.

HRH the Prime Minister and HRH the Crown Prince listened to a briefing by the Oil Minister Shaikh Mohammed bin Khalifa bin Ahmed Al Khalifa on the project, its importance, the implementation phases and its expected economic and developmental impact.

The Bapco Modernisation Programme (BMP) represents a major expansion and upgrade of the facility that will allow the total refinery throughput to increase up to a maximum of 380,000 barrels per day (bpd). This will increase the refinery’s capacity by 42 per cent, from the existing 267,000 bpd.
Its resid hydrocracking unit converts 78 per cent of lower grade feedstock into distillates which will then be refined into high margin diesel and kerosene. It will take 90 million safe man-hours to build. The BMP project will create more than 1,500 new jobs during construction, and 150 permanent high-skill jobs.

It’s estimated that every job at Bapco creates 12 more jobs in Bahrain. The programme will require a total of 24,000 contractor staff on site. BMP will occupy 565,631 sq m and it will require 65,000 tonnes of structural steel and more than 2,700 km of electrical cabling.

Currently, Bapco operates storage facilities for approximately 14 million barrels of crude feedstock and products, a marketing terminal and a marine terminal for its petroleum products. Approximately one-sixth of the crude feedstock originates from the Bahrain Field, with the remainder being pumped from Saudi Arabia through the A/B Pipeline. Some 90 per cent of Bapco's refined products are exported via the Sitra marine terminal.

TechnipFMC, jointly with Samsung Engineering and Tecnicas Reunidas, were earlier awarded a $4.2-billion contract by Bapco for the project. The project will be executed on engineering, procurement, construction and commissioning (EPCC) lump sum turnkey basis and is slated for completion in 2022.

HRH the Premier lauded the project, pointing out that the oil sector is at the threshold of a new phase ushering in a promising future. He underlined the major development projects in the sector which will have a great impact in backing the national strategies to achieve sustainable economic growth.

He also stressed the government's keenness to boost investments in the oil and gas sector and use their revenues in fast-tracking development and catering for citizens' needs.

HRH the Premier and HRH the Crown Prince toured the photo gallery which documents the historical phases of Bapco and its modernisation process.

They praised contributions of the national competencies in the oil and gas sector and their pioneering achievements which placed Bahrain among advanced countries in terms of coping with global development and the latest technologies in oil exploration and drilling. They pointed out the efforts made to enhance production and boost the competence and competitiveness of the oil sector. They said Bahrain, which is considered the first country in the region where oil was discovered, is ushering, by laying the foundation stone of the major project, into a new phase in modern oil industries, a scene that reflects the capability of the Bahraini people to achieve in all fields.

Bapco chief executive Dr Peter Bartlett spoke about the strategic modernisation project and its importance in backing the sustainable development efforts in the kingdom.

The strategic objectives of the project include:
• Refinery configuration and gross margin – A revised configuration shall allow for higher throughput, improve the product slate by converting more bottom of the barrel into high-value products, and increase gross margin with the objective to remain competitive under a wide range of prices and market scenarios;
• Energy efficiency – The BMP shall improve energy efficiency and lower the Energy Intensity Index (EII) of the refinery by installing energy efficient new crude and process units;
• Environmental Compliance – All new units shall function in compliance with applicable local environmental regulations as well as Lender Standards.

The project will also include a delayed coker unit, which is intended to produce coke from heavy refining residues (tar, fuel oil), which is a raw material in electrodes production for the aluminium industry. The coke produced can be used by the nearby Aluminium Bahrain’s (Alba) calcine unit. Alba will be able to use all the coke produced by the delayed coker.