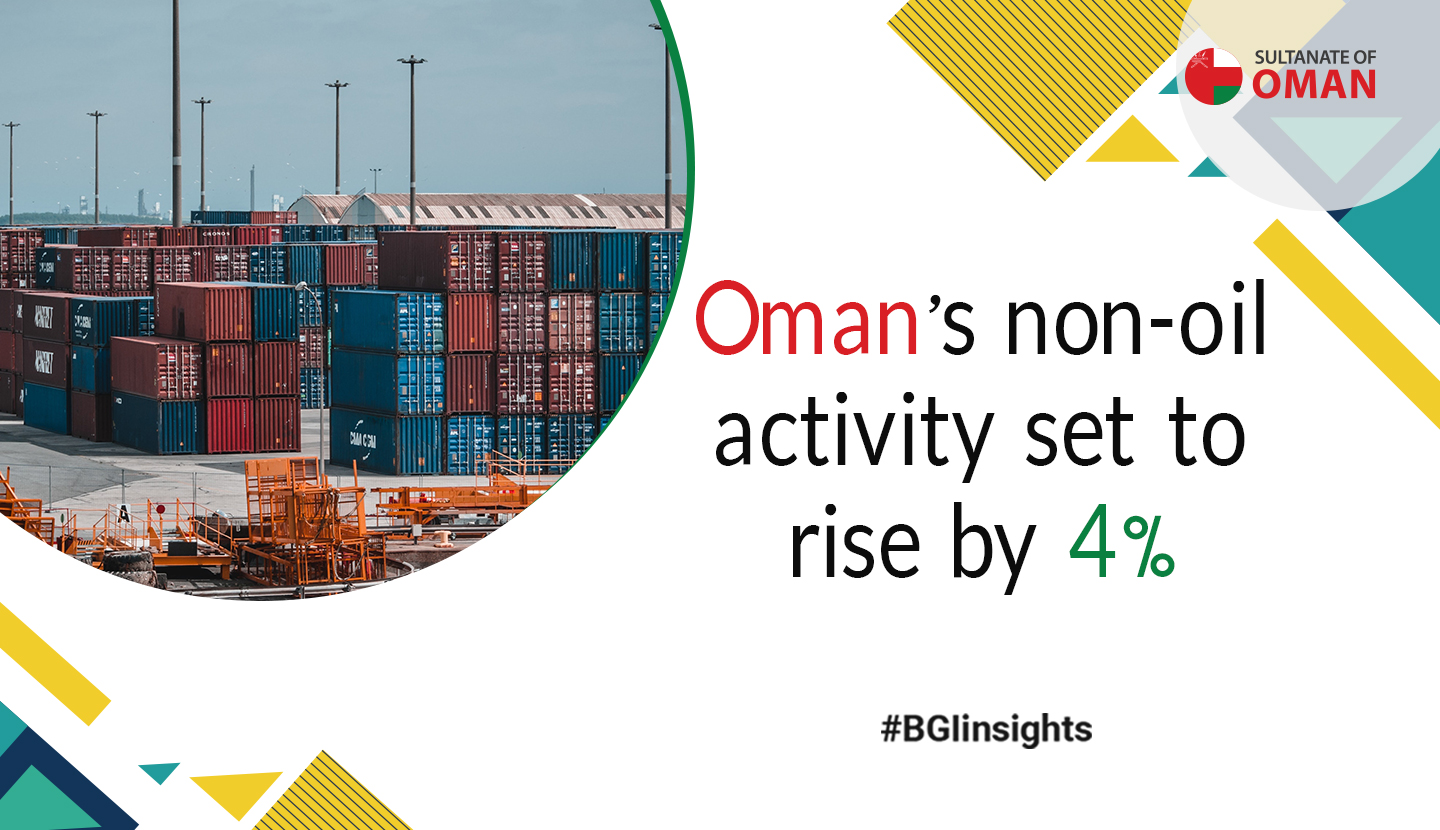 Oman plan to increase non-oil activities by an average of 4.3 per cent between 2016 and 2020, a new report from a global business consultancy said.

The Report: Oman 2019, which is published by the Oxford Business Group (OBG), says that under the government’s plans for economic expansion, a growth of 4.3 per cent expansion in the country’s non-oil sector has been planned for.

This is will significantly be aided by the Sultanate’s Tanfeedh plans for economic diversification, which has targeted five sectors for development, including manufacturing, logistics and transport, tourism, mining and energy and agriculture and fisheries.

According to data from the National Centre for Statistics and Information (NCSI), foreign trade from Oman’s exports amounted to OMR13.45 billion at the end of November 2018, of which non-oil trade accounted for 28.72 per cent, or OMR3.84 billion.

The report said, “The authorities are aiming to grow non-oil activities by an annual average of 4.3 per cent between 2016 and 2020. The Ninth Five Year Plan seeks to shift the economy to a more private sector footing by developing small and medium-sized enterprises, public-private partnerships (PPPs) and improving the investment climate. The plan also establishes a privatisation programme that will grant the private sector numerous opportunities to acquire, finance or manage government projects.

“In terms of broadening the economic base of the country, the Ninth Five Year Plan envisages both vertical expansion of the sectors dependent on oil and the development of non-oil sectors such as manufacturing, transportation and logistics, tourism and mining,” added the report.

“The key objective of Tanfeedh is to ensure public and private sector participants efficiently implement the government’s diversification strategy. The programme establishes clear standards and key performance indicators for the government’s objectives and provides periodic reports on the progress of the reform effort,” the report said.

Ahmed Al Hooti, a board member of the Oman Chamber of Commerce and Industry (OCCI), and the head of economic studies at the organisation, said plans were already underway to make achieving that number a reality.

“Already, we have in the pipeline plans that are being run, and it is known that we have five new sectors for expansion,” he explained.

“Three of these sectors are already running, and two will start running soon. These five sectors will actually encourage more people to work hard, because we have the means to run these kinds of businesses. Logistics, tourism and industry and manufacturing are currently working, and the mining, fisheries and agriculture sectors are on the way," he said.

"When you go to a factory or any agricultural area, you see that many of these are given to the private sector, or the government is setting up a joint venture, or you have some other investors who have been allocated projects in different parts of the country, so these will produce good profit sooner rather than later," he added.

Al Hooti said, “For the private sector, if you go to the tourism sector, you find that there is a new strategy already for tourism, for example, so each of these five sectors have their own strategies. I believe today, you have just to find the right arm of the private sector to run the businesses, and then this can be done

"In the OCCI for example, we were recently discussing the rules and regulations to establish a company, whether foreign or Omani, how to set it up faster, and reduce the time, reduce the regulations, and keep things a bit faster than they are at present,” he added.

He also said that the OCCI and other organisations that provide advice on the optimal functioning of companies to remain successful and help the country at the same time, were in regular touch with the government to formulate policies to benefit the nation.

“Of course, we are facing a lot of challenges, but this is the case everywhere, but today, we can see that we are hand-in-hand with the government, solving the problems, and asking the government to reduce the time, reduce the regulations, give support to both the investors coming into the country and to the small and medium enterprises, and I believe this process has already begun since last year, and in 2019, we will have better results that what we had in 2018,” said Al Hooti.

He added, “If you are doing a project in mining, you need at least eight to nine signatures from different government entities, and this is too much. We are asking to keep this to just three focal points, and we have asked the government to put one central registration point where the investor – Omani or foreign – can come to the centre and finish all his paperwork needs, and also pay at that point, and have more facilities for contractors and investors to pay more fees if needed, to keep the regulations easier and faster and to reduce the time. We are asking Tanfeedh and all the other government initiatives to take care of these kinds of issues and also help the private sector, and also provide more projects to help them work better.”

The report said that the Sultanate’s non-oil exports also rose substantially in 2017. This was aided by a rapid expansion in the exports of mineral products, which increased by 78.2 per cent, as well as manufactured plastic and rubber articles (45 per cent), chemicals (39.8 per cent), foodstuffs, beverages and tobacco (32.9 per cent) and base metals (22.8 per cent).

In addition, Dr Anchan CK, an expert on international investment in Oman, added that government policies were now being geared towards non-oil investment.

“The higher oil prices in conjunction with fiscal measures, implemented over the last years, helped in improving Oman’s fiscal position,” he explained.

“The monetary aggregates in Oman expanded during 2018 with an increase in domestic assets remaining as the primary source of such expansion. The credit conditions also improved and bank credit grew year-on-year by 7.5 per cent as at the end of 2018, suggesting some rebound in investment activities in 2019," he added.

Anchan said, “The composition of GDP is pegged to shift from the current 40:60 split between the hydrocarbons and non-oil sector to 15:85 by 2030. This trend is expected to continue to 2040, when hydrocarbons are expected to account for just seven percent of gross domestic product (GDP).

"One of the key area which is currently focused is the private sector integration, which places specific emphasis on small and medium-sized enterprises (SMEs) and the non-hydrocarbons sector. Currently, SMEs accounts for around 15 percent of GDP. Oman’s efforts to expand non-oil activity will continue into 2019 through the Tanfeedh initiative and new policies," he added.