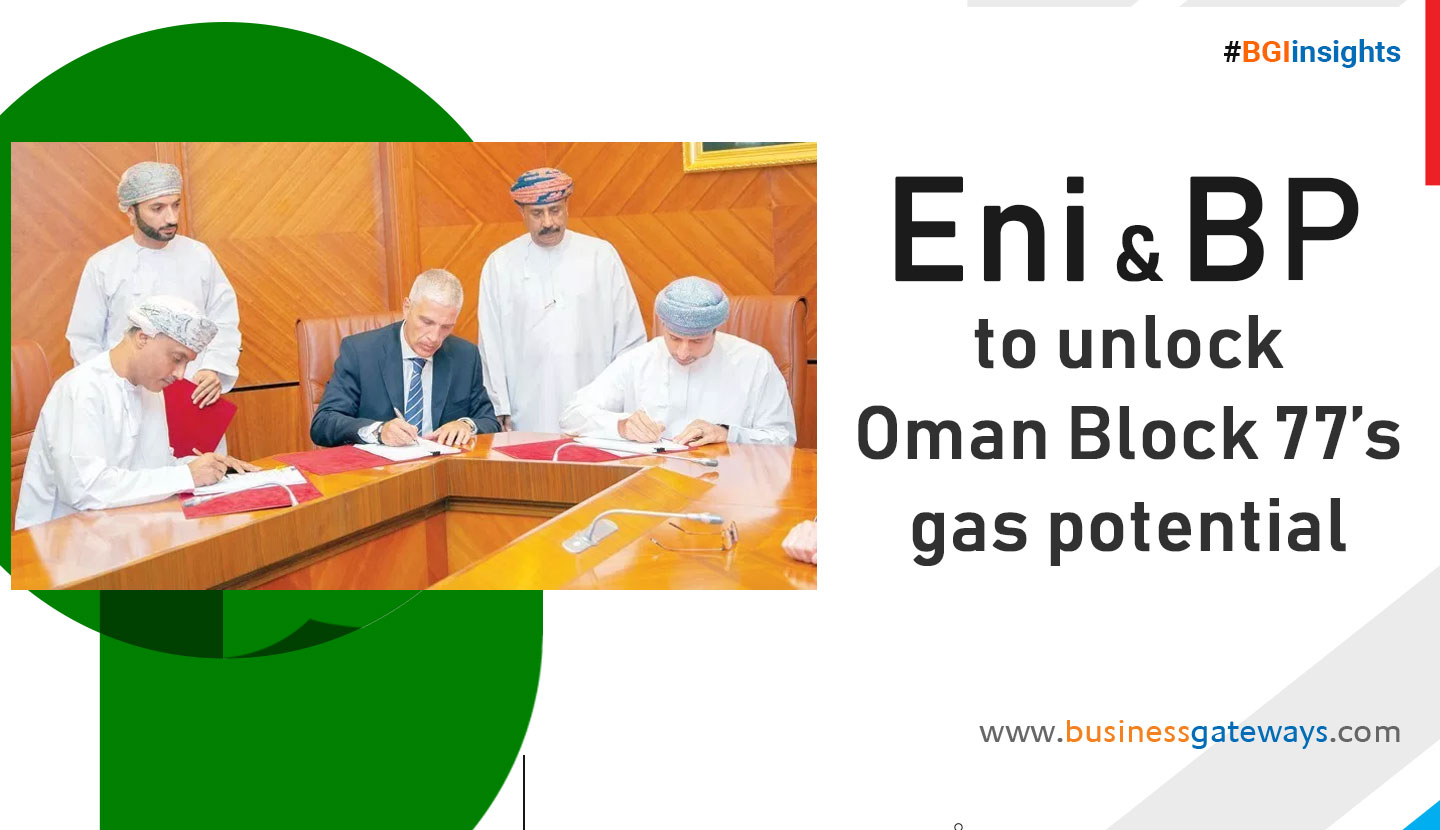 Energy majors Eni (Italy) and BP signed yesterday a key agreement to unlock the gas potential of Block 77 which, if determined to be prolific, could pave the way for yet another landmark Integrated Gas Development in the Sultanate, mirroring the current maiden venture centring on the Greater Barik discovery.

Salim bin Nasser al Aufi, Under-Secretary of the Ministry of Oil and Gas, signed the Exploration and Production Sharing Agreement (EPSA) with the joint venture of Eni Oman BV and BP Exploration (Epsilon) Ltd. Eni was represented by its Managing Director, Salvatore Giammetti, while Yousuf al Ojaili, President — BP Oman, signed for his side.

Block 77, adjoining Block 61 with its prodigious Khazzan and Ghazeer gas fields in central Oman, covers a total area of 2,734 sq kilometres. The EPSA pact builds on a Heads of Agreement (HoA) inked by the two energy giants with the Ministry of Oil and Gas in January this year. Eni and BP will each hold a 50 per cent interest in the EPSA, with Eni serving as operator during the exploration phase.

Both players will bring their considerable upstream capabilities to bear on the exploration and development of Block 77’s hydrocarbon potential, said Dr Salman Mohammed al Shidi Director General of Management of Petroleum Investments at the Ministry.

“BP is very successful in the upstream sector, while Eni is also focused of exploration. By coming together, they have the potential to generate big value from Block 77,” Al Shidi noted.

“Both Eni and BP have made a commitment to invest $37 million over two phases spread over six years. In the first phase of three years, they will undertake geological studies, as well as drill one gas exploration well. In the second 3-year phase, they will have a similar commitment.”

Asked if an Integrated Gas Development on the lines of the Greater Barik development is envisioned from Block 77, Al Shidi remarked: “Exploration has to take place first, but we think there is big potential.” He further added: “This is the type of Blocks that have conditional commercialisation, where if there is a big discovery, then you have to develop (the gas resource) here in Oman. You also have to develop projects at the downstream end in order to commercialise the upstream activities.”

Total and Shell as operators will develop several natural gas discoveries located in the Greater Barik area, with respective shares of 25 per cent and 75 per cent, before possible State back-in. The objective is to achieve an initial gas production of around 500 million cubic feet per day (MMcfd) and a potential to reach 1 billion cubic feet per day (bcf/d) at a later stage.

Total, for its part, will use its equity gas entitlement as feedstock to develop a regional hub in Oman for an LNG bunkering service. This entails the establishment of a new small-scale modular liquefaction comprising a 1 million metric tonnes per year train at Sohar Port. At the same time, Shell and Oman Oil & Orpic Group will jointly develop a first-ever Gas-to-Liquids (GTL) project of around 45,000 barrels per day capacity.

Commenting on the EPSA pact, Bob Dudley, BP Group Chief Executive, said: “Today’s announcement reflects the continued exploration potential we see in Oman and reinforces BP’s commitment to the Sultanate of Oman. We look forward to working with the Government and Eni to continue to explore and develop the country’s resources and secure its long-term gas production.”

Salvatore Giammetti, Managing Director of Eni, added: “We are happy to have this experience with BP. We already have a strong relationship with BP outside of this country, and now we are working together to bring this experience here. As Eni, we bring our well-known experience in exploration of a new play in an existing oil and gas province. Together with BP we would like to bring new value to this country.”