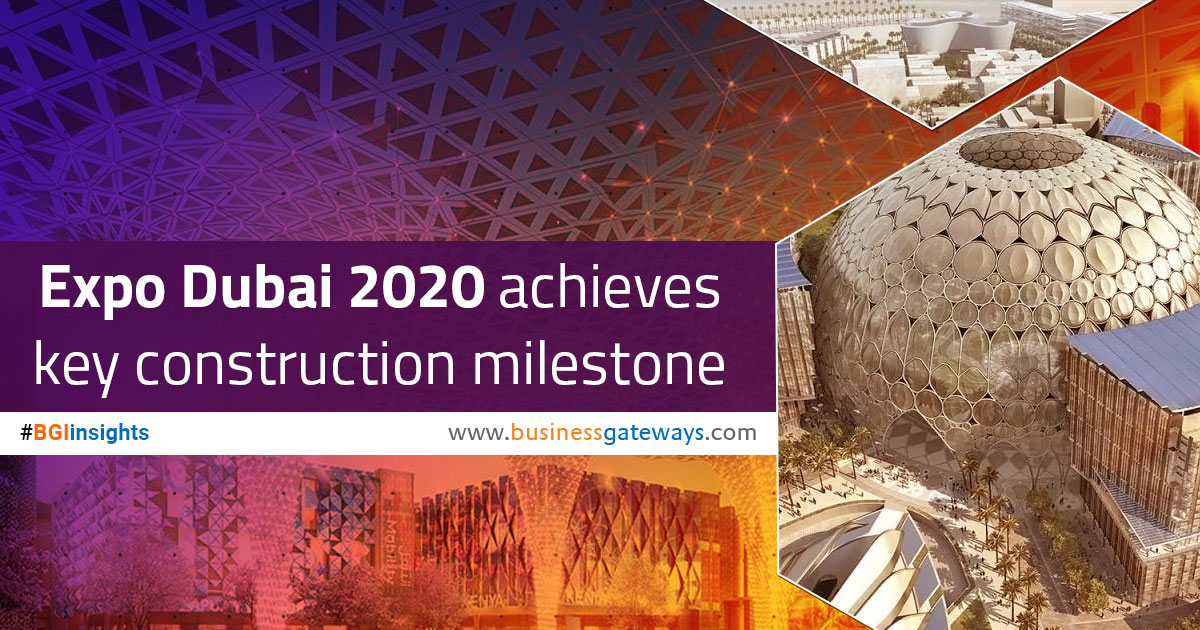 The Expo Dubai 2020 authorities have achieved a major construction milestone on its way to the mega global event with the final piece of Al Wasl dome being lifted into place after an intricate and complex building operation following months of planning.

The dome’s huge steel crown was positioned at the top of the jewel of the Expo 2020 Dubai site in an inspiring feat of precision engineering in the presence of Sheikh Ahmed Bin Saeed Al Maktoum, Chairman of the Expo Dubai 2020 Higher Committee, President, Dubai Civil Aviation Authority, Chairman, Dubai Airports, Chairman and Chief Executive, Emirates Airline and Group.

Enclosing a space of 724,000 cu m and standing 67.5 m tall – higher than the Leaning Tower of Pisa – the 130-m-wide domed steel trellis encircles Al Wasl Plaza, a structure that will be the heart of the Expo 2020 site and set to become Dubai’s latest architectural landmark.

Sheikh Ahmed described the crowning of the Al Wasl dome as a significant landmark not just for Expo 2020 Dubai but for the whole of Dubai and the UAE.

"This new architectural marvel joins a long list of inspiring designs that our country has created through collaboration, sheer hard work and the unending, ambitious vision of our leadership and people. It is another example of what the nation can do when it combines all its talents to such formidable purpose," he stated.

"Al Wasl dome will take a lasting place at the very summit of our country’s world-renowned architectural achievements. My heartfelt congratulations go to everyone involved in successfully completing this amazing engineering feat," he added.

The highly intricate operation, involving hundreds of on-site technicians who used special lifting equipment, was a unique engineering challenge, according to the man responsible,

Lauding the achievement, Expo 2020 Dubai's Chief Development and Delivery Officer Ahmed Al Khatib said: "It was the most exhilarating day of my entire career. We had one chance to get this right."

During Expo 2020, Al Wasl dome will be the largest 360-degree projection surface in the world, providing an unparalleled experience for millions of visitors. The crowning of the dome is a key milestone for Expo 2020, with all permanent Expo-led construction on track to be completed by the end of the year.

Weighing 550 tonnes of moulded steel, Al Wasl dome’s 22.5-m crown had to be precisely positioned on top of the vertical trellis, with a margin of error of only three millimetres.

It was completed using a technique called strand-jacking. Including the structures and equipment required to lift the dome during this process, the total weight was 830 tonnes – equivalent to 600 saloon cars.

It was positioned directly on top of the trellis already in place 45 metres above the ground, and attached using 53 temporary connection brackets. Working through the night, 800 engineers and construction technicians carefully monitored every millimetre of the process, using GPS indicators throughout to ensure perfect alignment.

To retain the geometry of the trellis structure as it was lifted, a series of tension cables was installed, connecting the perimeter of the trellis crown to a central temporary compression ring.

Multiple test lifts were conducted to measure the movement of the structure as it was lifted off the ground. The tensioned cables were adjusted until the trellis perimeter connection points were in the positions required for the full lift to commence.

Al Khatib said: "Crowning Al Wasl Dome was both incredibly exciting and one of the most challenging engineering operations in the world."

"Lifting such a large and heavy structure involved a huge number of variables. Something as simple as a shift in direction of the wind or change in air temperature could have had a big impact on our calculations, so constant monitoring and reassessment was essential throughout the process," he noted.

Al Wasl dome’s crowning was the culmination of 14 months of preparation, beginning when the final pieces of the dome’s steel trellising left Italy in June last year.

The individual elements first arrived in Dubai in July 2018 and the crown was carefully assembled at ground level before being raised into place. Now positioned, the final piece of Al Wasl dome will be welded to the rest of the trellis, a process that will take 25 days to complete.

The name Al Wasl means ‘connection’ in Arabic, and Al Wasl Plaza will be the beating heart of the Expo 2020 site, connecting the three Thematic Districts and providing a focal point for visitors throughout the six-month event.

Al Wasl Plaza has been designed to form a grand ‘urban room’, a meeting place that creates a shaded microclimate unlike anywhere else in Dubai; a space that simultaneously and uniquely encompasses vibrant performances and natural landscaping.

Reflecting the theme of Expo 2020 Dubai, ‘Connecting Minds, Creating the Future’, the design and construction of Al Wasl dome is a global collaboration, involving contributions from companies from 13 countries.

Al Wasl Plaza, which includes the dome’s unique and iconic structure, was designed by US-based architects Adrian Smith + Gordon Gill Architecture; the raw steel for the trellis was sourced from the Czech Republic, Hungary and Poland; the steel was shaped into its flowing curves by companies in Belgium, Germany and Spain, before being moulded into its intricate latticing in Italy by Cimolai Rimond.

Expo 2020’s Official Programme Delivery Management Provider, Jacobs Mace, worked on the overall project management and companies from the US, Canada, China, France, Japan and Mexico also played key roles in the completion of the dome.

In preparation for its pivotal role at Expo 2020, Al Wasl dome’s steel structure will next be transformed into an immersive 360-degree projection surface, with projections visible both from within the dome, providing a unique visitor experience.

Expo 2020 Dubai will kick off on October 20 next year and run until April 10, 2021. During the six- month period, it expects to welcome 25 million visits, with 70 per cent of visitors projected to come from outside the UAE – the largest proportion of international visitors in the 168-year history of World Expos, said the organisers.

For 173 days, it will be the World’s Greatest Show, and many of the 60-plus live events per day will be held in Al Wasl Plaza, it added.