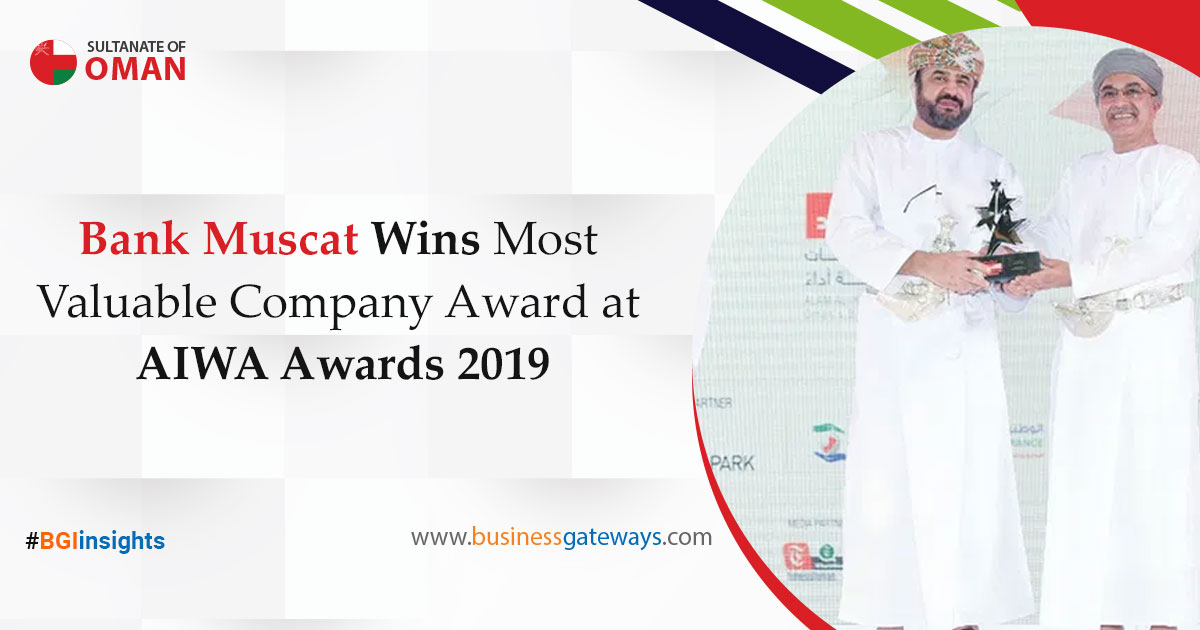 Bank Muscat, the flagship financial services provider in the Sultanate, has won the top award for being the Most Valuable Company of the Year among all the listed companies on Muscat Securities Market (MSM) at the ninth edition of the Alam al-Iktisaad Wal A’mal (AIWA) Awards. The award was handed over by Shaikh Khalid bin Omar al Marhoon, Minister of Civil Service, to Shaikh Waleed al Hashar, Chief Executive Officer, Bank Muscat.

According to the joint survey of AIWA and Gulf Baader Capital Markets (GBCM) for Best Performing Companies, Bank Muscat emerged as the winner of the ‘Most Valuable Company of the Year’ among the listed companies on Muscat Securities Market (MSM) in 2018.

Shaikh Waleed al Hashar, Chief Executive Officer, Bank Muscat, said: “Bank Muscat has been consistently winning prestigious local and international awards, thereby setting performance benchmarks across all aspects of the Bank’s operations. Today, the Bank has the largest network of e-channels in the country to provide convenient and secure banking services across Oman. The Bank has further demonstrated its leadership position and is contributing to the growth and development of the Sultanate’s economy not only through banking but also through its pioneering CSR initiatives, which promote sustainable development.”

It is important to note Bank Muscat has won multiple awards in the recent past including being chosen as the Best Bank in Oman by the editors of a number of prestigious international journals and publications. Award winners were chosen by the editors after extensive consultations with corporate financial executives and bankers, banking consultants and analysts across the world. The award criteria included growth in assets, profitability, geographic reach, strategic relationships, new business development and innovation in products. Bank Muscat had earlier won the Best Bank in Oman Award from Emeafinance and Euromoney magazines in 2019, while also topping the ‘Best Bank in Oman – Large Size’ survey conducted earlier this year by Oman Economic Review (OER) and Gulf Baader Capital Markets (GBCM).

The bank prides itself in its deep understanding of customer needs, offering financial expertise and guidance at all levels. Driven by robust policies to achieve global best practices, the Bank is focused on strategic initiatives to confront challenges and further increase its market share.