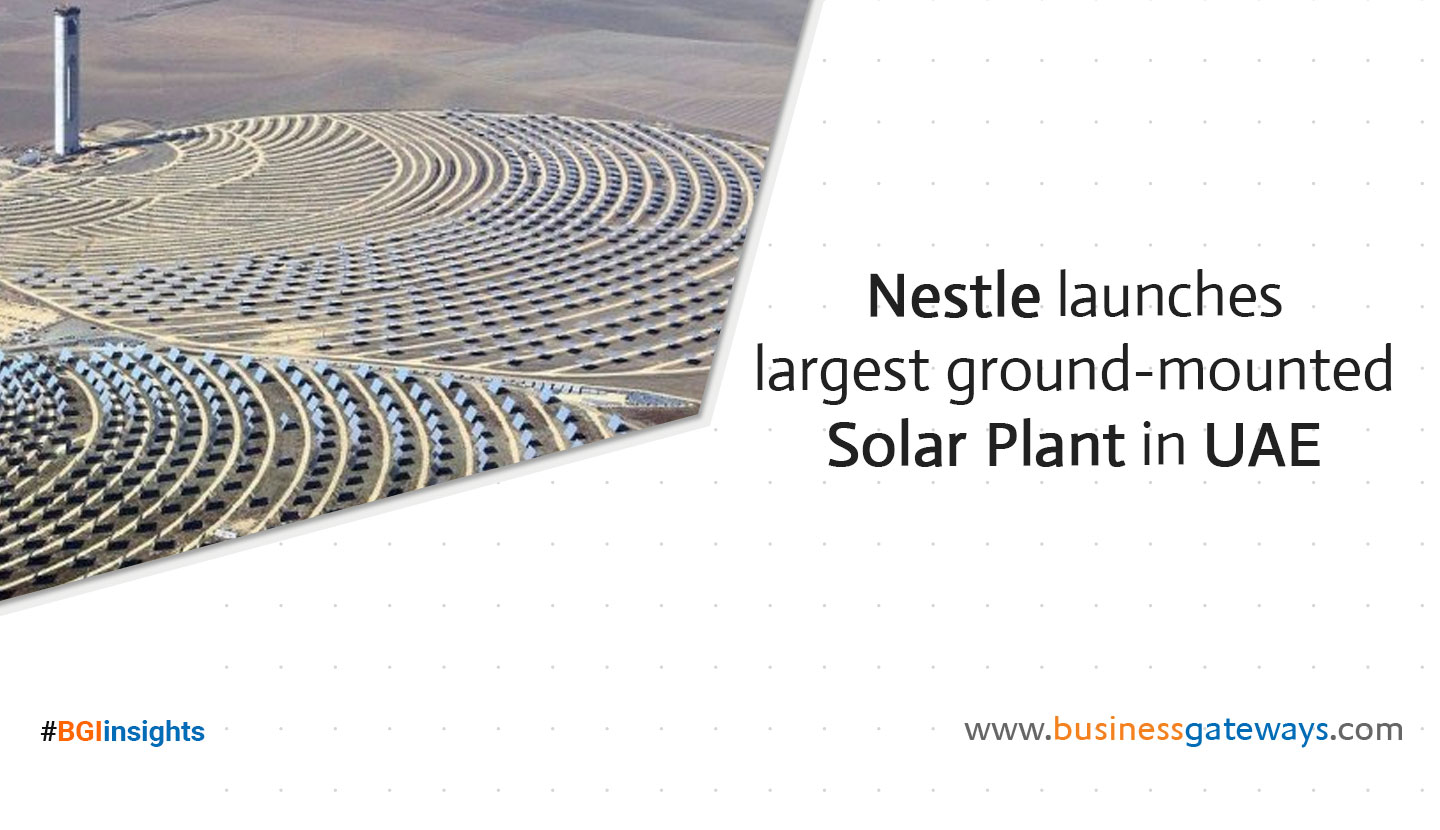 Dubai Electricity and Water Authority (DEWA) has announced the launch of the UAE’s largest ground-mounted private solar plant within the factory premises of confectionery and dairy products giant Nestle at Al Maha area in Dubai.

The plant entails installing nearly 28,000 photovoltaic (PV) panels at the company’s three manufacturing sites, that will generate 10GWh of electricity per year – eliminating at least six million kg of carbon dioxide (CO2) emissions annually, the equivalent of annual emissions from 1,500 passenger cars or the energy consumption of 800 homes.

The launch was held in the presence of Saeed Mohammed Al Tayer, the managing director and chief executive officer of DEWA, Khalifa Al Zaffin, the executive chairman of Dubai Aviation City Corporation & Dubai South, Massimo Baggi, ambassador of Switzerland to the UAE and Bahrain and Dr Franco Vigliotti, project head and dean of the Swiss Federal Institute of Technology Lausanne (EPFL) in the Middle East besides Marco Settembri, executive vice-president Nestle and CEO Zone (Europe and Mena) and Yves Manghardt, Nestle Middle East chairman and CEO.

The largest site at Al Maha will alone house 20,000 PV panels, generating 7.2GWh of electricity and eliminating 4.5 million kg of CO2 per year, said the statement from DEWA.

The solar plant is part of DEWA’s Shams initiative which encourages building owners to install PV panels and connect them to the Dubai utility’s grid.

Speaking at the launch, Al Tayer said: "I am pleased to be here again at the Nestle Al Maha factory in Dubai South, to witness the harvest of co-operation on sustainability between DEWA and Nestle."

"This is a real example of the positive effect of collaboration between the public and private sectors in renewable and clean energy, which will have a positive net effect on the environment as a whole locally and internationally," stated the DEWA chief.

Al Tayer lauded Nestle’s close collaboration with DEWA to add to the achievements of the Shams Dubai initiative that was launched in support of the Smart Dubai initiative.

"Shams Dubai has achieved remarkable success since its launch in 2014, with 1348 solar systems connected to the electricity grid so far, with a total capacity of 117 MW," he noted.

In his address, Settembri said Nestle was committed to stewarding resources for future generations through caring for water, safeguarding the environment and acting on climate change.

"The solar plant in Dubai is an important contribution to Nestle’s global ambition to achieve zero net greenhouse gas emissions by 2050. We are embracing the most ambitious aim of the Paris Agreement to limit global temperature rise to 1.5 degree C," remarked Settembri.

One third of Nestle’s 413 factories in the world are already using 100 per cent renewable electricity, and the company will continue to increase the use of energy from renewable sources, he added.

The company produces with zero waste for disposal at its food manufacturing sites in the region.

“We are determined to continue to play a positive role in the Middle East and contribute to the United Nations’ Sustainable Development Goals (SDGs). With our scale, and our actions, we can create positive impact in society, and be a force of good,” said Manghardt.

In addition, research and multi-sectoral partnerships are being developed to achieve the goal announced by Nestle in 2018 to make 100 per cent of the company’s packaging recyclable or re-usable by 2025, with the objective that none of its packaging, including plastics, ends up in landfill or as litter, he stated.

Recent examples include the creation of the Nestle Institute of Packaging Science in Lausanne (Switzerland) to evaluate and develop new sustainable packaging material and solutions in collaboration with academia, suppliers, startups, and others, he added.

Nestle said it has already defined category and product specific manufacturing roadmaps to ensure only recyclable or reusable packaging is used by 2025.

It is also playing an active role in developing plastics collection, sorting and recycling schemes across the world, through Extended Producer Responsibility (EPR) actions that are contributing to industry coalitions that aim to create circular economies within countries, recycling and reusing in a manner that creates shared value for all involved. In the Middle East, Nestle is partner of EPR Coalitions in Abu Dhabi and Jordan.