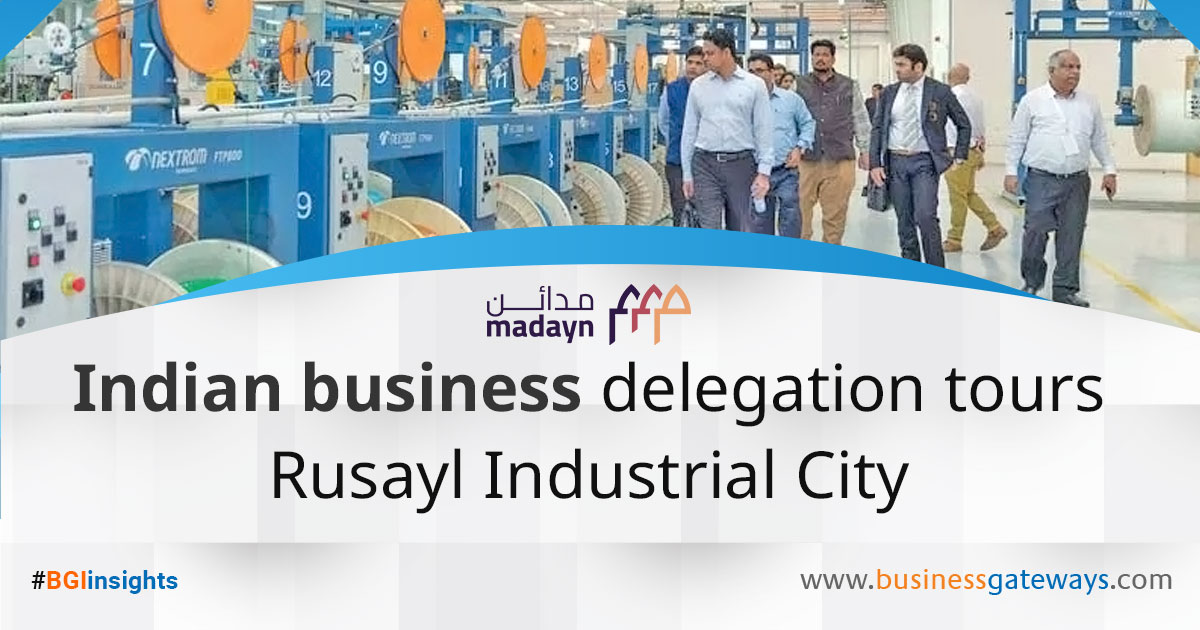 During the second day of the event, a field visit was organised to Al Rusayl Industrial City where the Indian delegation was briefed on the current projects implemented by Oman Investment and Development Holding Company (Mubadrah) at Al Rusayl.

These projects include the logistics project valued at around RO 1.6 million; new gates and entrances project with a value of RO 2.5 million; and the project of developing and incorporating services to expand the industrial city with a total value reaching RO 34 million. Furthermore, Mubadrah is also preparing to float a tender for B2 Phase to expand Al Rusayl Industrial City. The value of this tender is expected to touch RO 15 million.

The officials also highlighted that the total area of Al Rusayl Industrial City has come close to 11 million sqm by the end of 2018 and is home to 309 projects. The total volume of investments in this industrial city has touched approximately RO 372,554,229 and the number of national and foreign workforce has reached 21,881 during the same period.

During discussions, the Indian delegation was acquainted with the localisation process in the various industrial cities in Oman, the objectives of the one-stop shop, time taken to finalise the procedures, in addition to the types of investments in the country.

As part of their visit to Al Rusayl Industrial City, the Indian delegates visited Oman Fiber Optic, which was constituted in 1996 and commenced cable production in early 1999. OFO is recognised of using state of the art technology to draw fibre and manufacture world class fibre cable products.

The delegation then toured the Knowledge Oasis Muscat (KOM) where they were introduced to KOM’s vision in enhancing Oman’s position as the region’s leading centre of business excellence, innovation and entrepreneurship in creating, promoting and developing Oman as a robust, diverse, prosperous and self-sustaining knowledge-driven economy. KOM aspires to contribute to the advancement of economic diversification through offering investment opportunities in the IT sector and eventually build a knowledge-based economy in the Sultanate.

It is worth mentioning that by the end of 2018, the total volume of investments in KOM has touched RO 276,501,165, and the total area of KOM has reached 778,602 sqm. The number of projects has amounted to 208 projects (existing, under construction, and those allotted with space), and the number of workforce has reached 5070 during the same period.

The delegation also visited the National Business Centre (NBC), which is an initiative launched by Madayn in KOM to offer promising Omani entrepreneurs a platform to develop their business ideas and advance them into growing ventures.