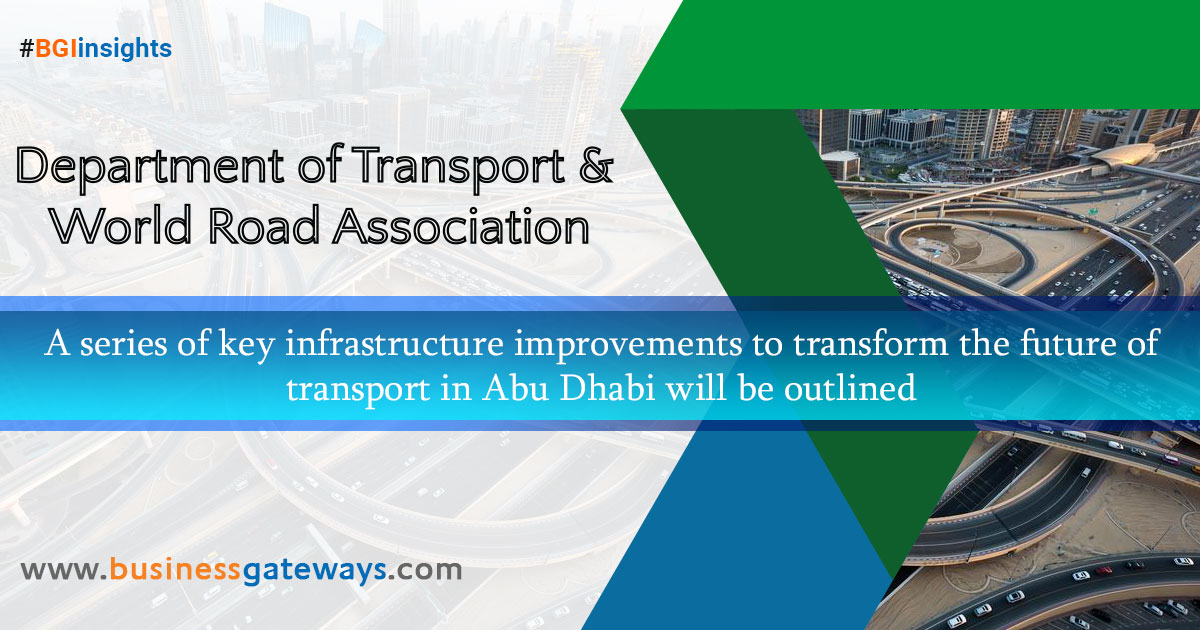 A series of key infrastructure improvements to transform the future of transport in Abu Dhabi will be outlined by the Department of Transport – Abu Dhabi (DoT) before a global audience at the World Road Congress Abu Dhabi 2019.

The event, which kicked off today (October 6) in the UAE capital, is being hosted by DoT and World Road Association (PIARC) under the theme 'Connecting Cultures, Enabling Economies.'

Over the next four days, thousands of road transport professionals will be offered an insight into how Abu Dhabi has built a world-class infrastructure and is now preparing for the future.

As part of the DoT’s ambitious plans for 2030, work is under way to reduce emissions, improve safety and ease congestion with more flexible infrastructure that meet the demands of growing population, said industry experts.

Among the planned projects that is due to be completed by 2030 is the Mid Island Expressway while the widening of the E16 road from Al Ain to Khalifa Port will significantly improve the existing network.

A key focus will be improving accessibility to the main transport hubs to ensure Abu Dhabi remains a competitive global destination for trade and business.

For example, as part of the expansion of Abu Dhabi International Airport, major upgrades are underway to the area’s roads network and interchanges ahead of the opening of the Midfield Terminal complex, they stated.

In addition, Khalifa Port - one of the largest ports in the world and a global maritime hub - is undergoing expansion and the port’s connectivity will be further enhanced with the introduction of the Etihad Rail network.

Funded by the UAE government, it will significantly boost the country’s economy and give businesses across the entire nation the edge in key markets.

With the Etihad Rail project already underw ay, commuters will have even more options to travel to other emirates and neighbouring nations, while there are studies to explore advanced technologies for developing future transport modes in Abu Dhabi, said the experts.

Other transport improvements include the recent completion of the widening of one of Abu Dhabi’s busiest roads, the E10 highway, enabling better access from Abu Dhabi to other emirates.

Furthermore, the construction of new projects such as the new tunnel at Zayed Port, Umm Lafina road and the causeway project will provide extra capacity to the road networks and ease congestion in accessing Reem Island and travelling on Sheikh Zayed road, it stated.

In the western region, commuting has been boosted with the completion of the Sheikh Khalifa International Highway (E11) reconstruction project from the Mafraq Interchange in Abu Dhabi right up to Al Guwaifat at the border of Saudi Arabia.

This has improved the network capacity and accessibility to neighbouring areas as well enhancing and improving traffic safety.

A series of environment-friendly initiatives are also under way, including a major project to replace thousands of streetlamps and traffic signals with sustainable and energy-efficient LED lights.

The DoT has also initiated the region’s first-of-its-kind pilot project in co-operation with the Environment Agency – Abu Dhabi to reduce the effects of high temperatures of asphalt roads on the environment. This is part of their comprehensive walking and cycling strategy and implementation plan, it added.

These accessibility improvements, which are underway, will encourage more people to walk, cycle or run in Abu Dhabi. There are also plans to improve the pedestrian network by building new features including more trees and increasing the width of the pavements.

Khalifa Almazrouei, the Undersecretary of DoT, said: "We have ambitious plans to build, operate and maintain an excellent quality of our infrastructure and introducing new modes of transport that it will make it easier than ever before to travel around the emirate."

“As the host of the prestigious World Road Congress, being held in the Middle East for the first time this year, Abu Dhabi has a unique opportunity to showcase its future vision to the world and mark the UAE capital out as a world-leader in urban planning and infrastructure development,” he added.