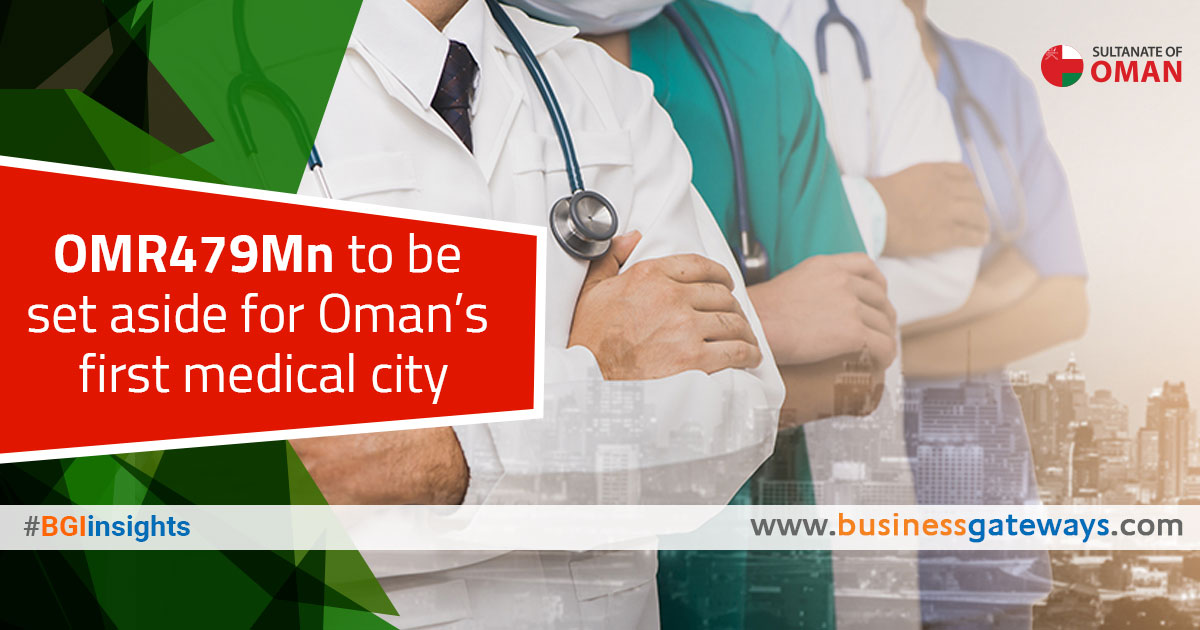 Nearly half a billion Rials will be allocated to building the Sultanate’s first medical city over a span of five million square metres of land.

According to Undersecretary of Health Ali Al Hinai, the upcoming project is being designed in such a way that it will not only finance itself but also make profits. He said, “This project can’t be called ‘a reform in the health sector’, but it is definitely a new shift, a quantum leap for Oman’s health sector.”

He added: “Assuming that government hospitals are currently running at 70 per cent occupancy and double bed rooms are free, we would charge a symbolic fee for single bed rooms or suites. We are looking at OMR 7.776 million per year of revenue from the hospital beds alone.”

The medical city will be a hub for a multitude of medical services offered in the country, and in addition to treating patients who come to the city, will contain enough facilities that can be used by hospitals outside the campus to receive diagnoses for patients that are being treated on their premises. Once received, the results can be quickly sent back to the hospitals in digital format, enabling to save precious time in treating patients.

“The medical city will provide a way to raise the quality of medical systems,” Al Hinai said. “We intend to have radiology experts at the medical city. From other hospitals in Oman, people can get scanned and then send the scan digitally to the medical city, where they will be read and interpreted. They will then be sent back to the hospital where the patient is. Private hospitals will also be able to use this service for a fee.”

“We wanted to have a medical city which can be self-sufficient,” he added. “We have many years of experience in building and managing hospitals, and so there would be a public company, in partnership with the private sector, which will build and manage projects for the private sector. We also have experience in laundry and catering, as we work with 10,000 to 12,000 articles of clothing and 4,000 to 6,000 meals each day. We are looking for partners in the private sector to start companies in this field as well.”

The medical city is yet another initiative under the country’s Tanfeedh programme for economic expansion, which aims to wean the country away from primarily oil-and-gas-based sources of income. Five major areas of high-potential growth have been identified, including transportation and logistics, agriculture and fisheries, energy and mining, tourism, and manufacturing.

As part of the expansion into manufacturing, factories that make and design surgical tools will be set up to service the medical city, as well as provide surgical implements to other hospitals in the country — in addition to exporting them to other nations — which will help Oman both cut its import dependencies and generate revenue through exports.

“We will be able to cut ministry spending by creating private companies to manufacture surgical tools and medicines,” said Al Hinai. “The ministry spent OMR 757 million in 2018, of which OMR100 million was spent on surgical and medical tools, and 90 per cent of them are imported. It is time for us to manufacture these articles ourselves, moving towards self-sufficiency while also raising revenues.”

He added: “The medical city, which will be built in Al Fulaij — which is near almost half the people living in Oman — will cater to a large number of people with 1,249 hospital beds in its government hospital facilities, adding to the beds in the private hospitals in the area, as well as facilities for the Oman College for Medical Sciences, and finally, provide medical access to commercial areas.”

The medical city will receive financing through direct revenue from the project, investments from its health fund, as well as taxes such as the sin tax and potential future taxes on sugar and junk food.