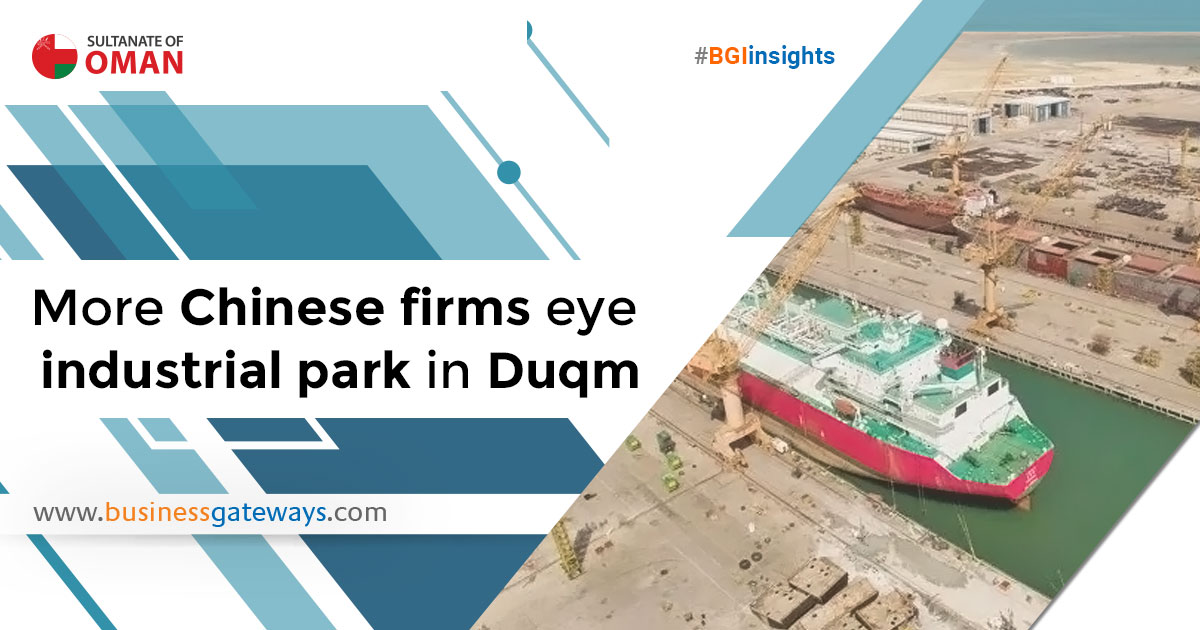 More Chinese companies are expected to enter Sino-Oman Industrial Park in Al Duqm in addition to the recent five firms which have completed registration.

This was stated by Li Lingling, Ambassador of the People’s Republic of China to the Sultanate, on the occasion of the 70th anniversary of Chinese Republic and the first anniversary of the establishment of Oman-China strategic partnership.

She stressed that the Special Economic Zone Authority at Duqm is one of the strategic projects of the Sultanate, noting that China is a priority investment in this region because of the economic weight, which enhances the status of the Duqm zone at international level, adding that five companies have recently been registered to invest in the industrial park.

“The industrial park is the landmark project for the ‘Belt and Road’ cooperation between Oman and China. We attach great importance to it and spare no effort in promoting the development of the industrial park, and it has achieved tangible results by now. We are expecting more manufacturers and service providers to join us this year,” she added.

Some of the companies in the manufacturing of oil and gas pipelines, building materials and fisheries have already begun their programmes, while one of them has officially started construction of its pipelines for oil and gas sector, she said.

Li Lingling noted that 2019 is an important starting point for Oman-China relations as they enter into a new era.

“China will continue to respect the political system and path of development chosen by the Sultanate of Oman. Generation after generation, enhancing the convergence between the concepts, strategies and policies of development and projects of cooperation and humanitarian development between the two countries and expand practical cooperation which encompasses all dimensions and fields within the framework of joint construction of the Belt and the Road project that benefits the two peoples better” she said.

According to the World Bank report, China’s “Belt and Road” initiative will help lift 7.6 million people out of extreme poverty and 32 million people out of moderate poverty. Trade-in-countries participating in the initiative will increase by 2.8 per cent to 9.7 per cent. World trade is between 1.7 per cent and 6.2 per cent, and global income increases by 0.7 per cent to 2.9 per cent. In terms of defence, the Chinese naval fleet has begun patrolling the Gulf of Aden, which sees more than 6,600 ships transiting the waters off Somalia, by rescuing, delivering help to more than 70 vulnerable ships, which is being highly appreciated by the international community.

The people-to-people exchange between the two countries is on the rise as well. In April this year, the second “China-Oman Tourism Forum” jointly organised by the Chinese Embassy, the Ministry of Tourism of Oman and the Oman-China Friendship Association has achieved good results and made more Chinese tourists to travel to Oman.

In terms of human resource training, this year China has provided several training courses in a diverse range of topics for nearly 400 Omanis. Most of the training courses were free of cost, while more opportunities will be provided to Omanis, and she hoped the number of beneficiaries is likely to double.