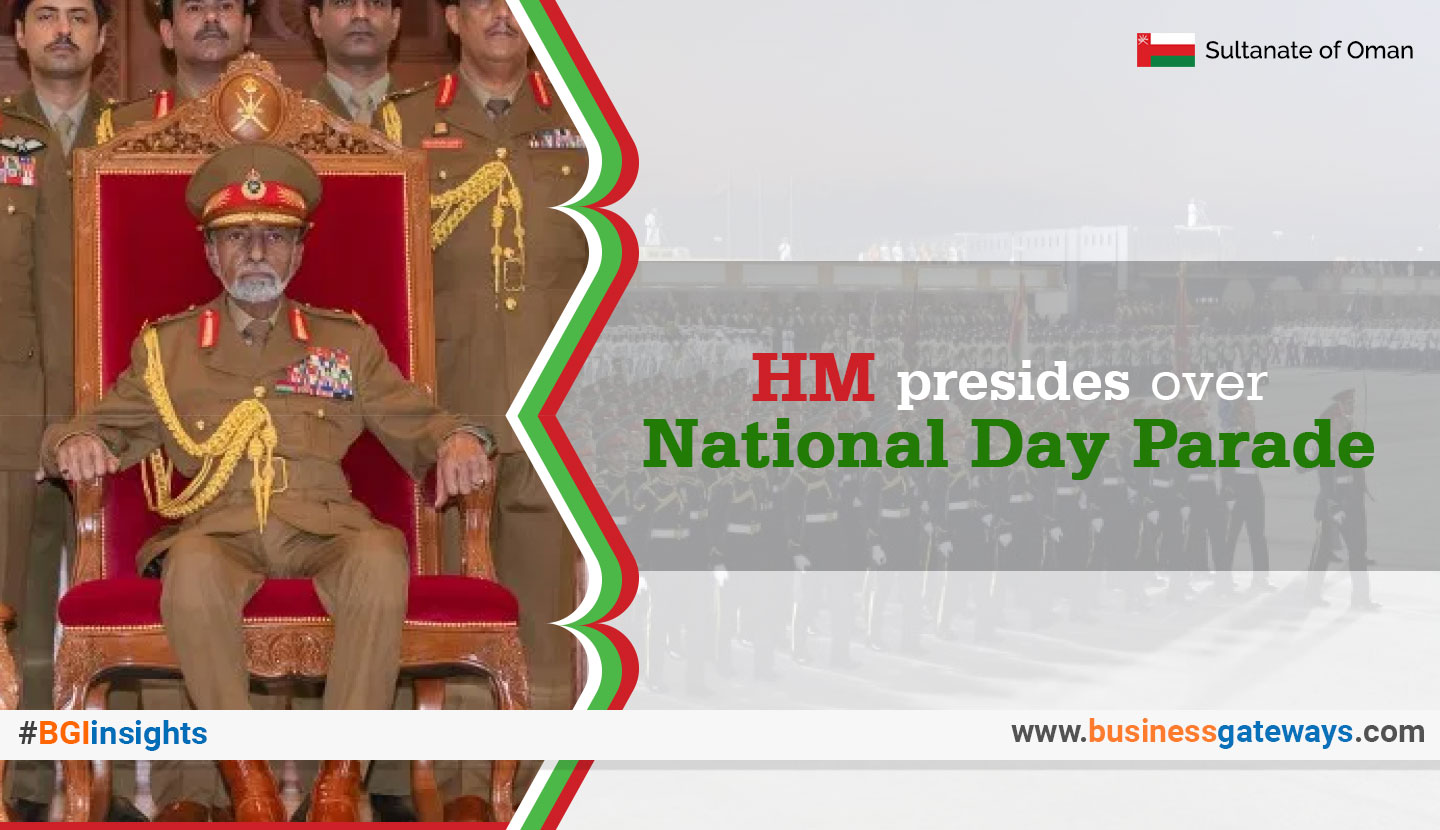 His Majesty Sultan Qaboos, the Supreme Commander of the Armed Forces, on Monday presided over the military parade, which was staged at the military parade ground of Said Bin Sultan’s Naval Base on the occasion of the Sultanate’s celebrations of the 49th Glorious National Day.

Upon His Majesty’s ascension to the Royal Box, the parade columns gave the military salute, the Royal Anthem was played by the combined military musical band while the artillery fired a twenty-one gun salute to His Majesty.

Afterwards, the commander of the parade column approached the Royal Box requesting permission from His Majesty, the Supreme Commander of the Armed Forces, to start the military parade, which began with the joint military musical parade band that represents the corps of the SAF, RGO, ROP and RCA, which passed in slow and regular march before the Royal Box.

Then, the columns of the Protocols Guard performed its military parade accompanied with musical pieces of the joint military music in a slow and regular motion passing before the Royal Box, giving the military salute to His Majesty, the Supreme Commander of the Armed Forces. Then, the combined music horseback marching band and the horse riders of the RGO Cavalry and the Royal Cavalry of the RCA staged a performance passing before the Royal Box.

Then, the Royal Anthem was played and the columns of the Protocols Guard gave the military Salute to His Majesty the Sultan, signaling the conclusion of the military parade. Then, His Majesty Sultan Qaboos, the Supreme Commander of the Armed Forces, left the Military Parade Ground.

His Majesty the Sultan was accompanied during the parade by their highnesses, the chairmen of the State Council and Majlis Ash’shura, their excellencies the ministers, advisers, commanders of SAF, RGO, SSF, ROP and the military and security apparatuses, honourable members of the State Council and members of Majlis Ash’shura, undersecretaries, governors, judges of the Governorate of Muscat, Omani Ambassadors at the Foreign Ministry, heads of the diplomatic missions of the sisterly and friendly countries accredited to the Sultanate and walis.

The parade was also attended by military attaches, senior military commanders and officers, state senior officials, shaikhs and dignitaries and commissioned and non-commissioned officers and personnel of SAF, RGO, SSF, ROP, RCA and other security services in the state.