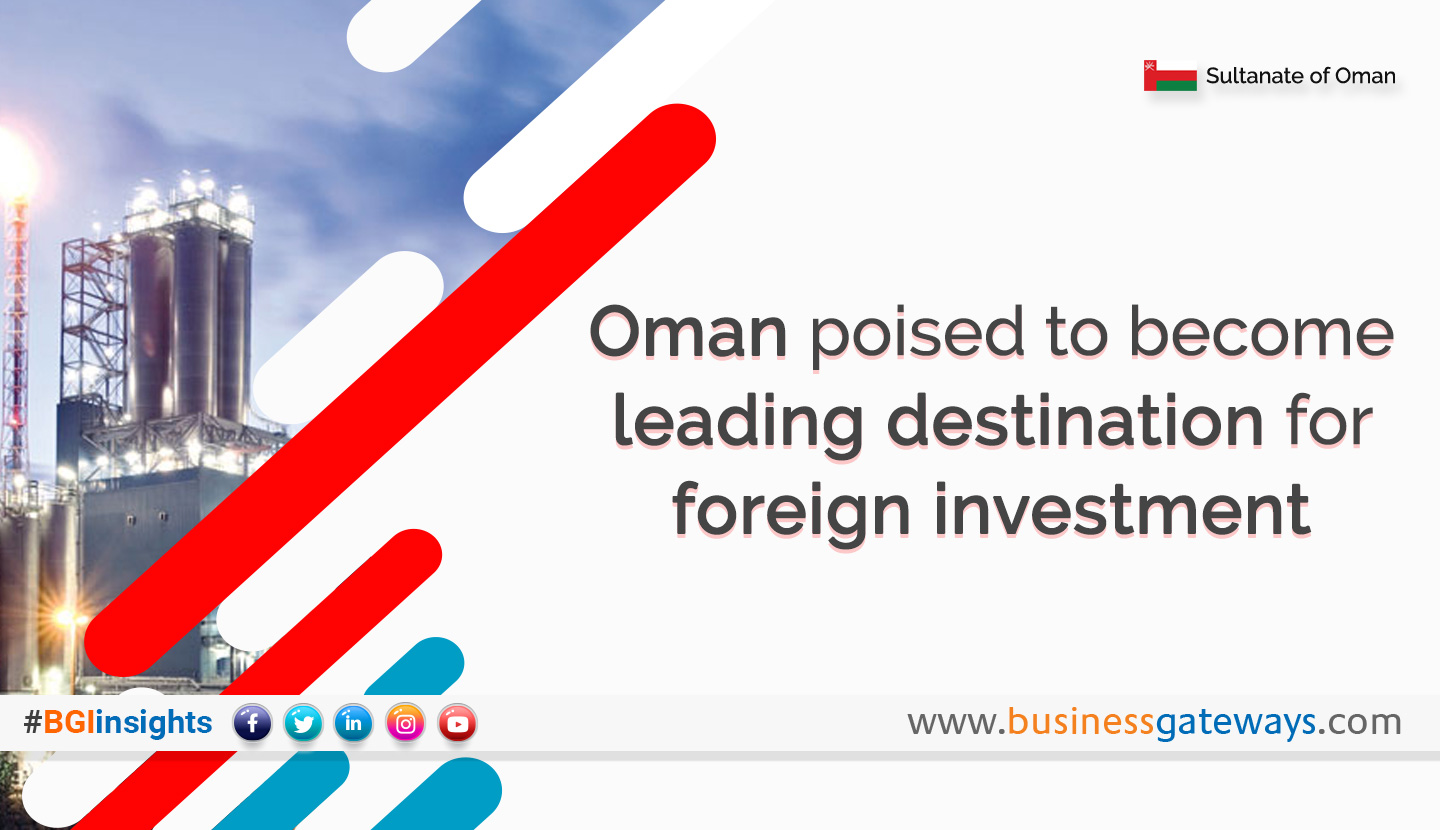 Fujio Mitarai, Chairman and CEO of Canon Inc., and creator of the successful management style – The Mitarai Way, once famously quoted “Diversification and globalisation are the keys to the future.”

The Sultanate of Oman, keeping up with its continued goal to diversify and boost the economy, introduced the Foreign Capital Investment Law that went into effect in January 2020. The Law, promulgated by Royal Decree 50/2019, aims to promote the Sultanate as a leading investment destination and to provide a favourable environment for attracting foreign investments into the country.

Conveniently located in the south-eastern coast of the Arabian Peninsula, Oman is at the centre of the east-west trade routes connecting markets in Europe, Asia, Africa and North America. Its strategically situated ports in Duqm, Muscat, Suhar, Salalah and Khasab provides fast sailing times to Asia, Africa and Europe.

Oman Air’s expanding network puts Oman within a few hours of the major trading centres and Oman’s airports provide direct flights to 95 cities across the globe and several more across the expanded networks of the 34 different airlines that fly in and out of Oman. Oman’s road infrastructure facilitates easy access to other GCC countries and Oman’s roads have been ranked among the world’s best.

One of the biggest challenges foreign investors face for new projects is finding qualified and skilled workforce that can be deployed easily. This challenge can be overcome by the young and educated talent pool that Oman has to offer. Approximately 28,000 students graduate from Omani higher education institutions each year, who can be employed by foreign investors, greatly benefiting them, rather than having to source talent from outside. New industries create new opportunities and the Sultanate has been focusing on continually enhancing skill levels for the Omani workforce through various national programs.

Oman, apart from being one of the most peaceful countries in the world, also provides a safe and welcoming community that promotes cultural diversity and racial harmony. Oman is home to a vibrant expat community that amounts to approximately 42 per cent of the total population of the country. It boasts one of the lowest crime rates in the world and has been considered one of the best places in the Gulf to bring up a family.

Additionally, the attributes gained by training and sharing experience with the local Omani workforce will increase the education and overall human capital of the country.

Fluctuations in foreign currency is another barrier for several investors, but the Omani Rial benefits from being pegged to the US Dollar offering reduced currency fluctuation risk to the Investor.

Central Bank of Oman (CBO) also has high levels of foreign exchange to maintain the peg and as per CBO’s most recent statistical bulletin (issued in December 2019); the Sultanate has RO 6.63 billion of foreign assets that have been consistently maintained for the last several years.

Investors also do not need to worry about complicated tax structures as companies in Oman are only subject to a flat 15 per cent corporate tax with 0% personal income tax. Oman also has signed several double taxation relief treaties with many countries, and the investor-friendly legislative environment has no restrictions on repatriation of capital or profits.

The United Nations Conference on Trade and Development (UNCTAD) in its 2019 World Investment report noted that the FDI inflows into Oman reached $4.1 billion in 2018, up from $2.9 billion in 2017. The total direct investment remains strong at $28.2 billion, approximately 34.3 per cent of the GDP.

Oman has made its mark on the world stage as one of the most peaceful and friendliest countries in the world. Oman continues to extend its friendship to the world and the Foreign Capital Investment law is a demonstration of its continued efforts to bring new opportunities for the country and to bring the world closer to Oman.

Indeed, as His Majesty Sultan Qaboos said in a televised speech on November 26, 1975, “We belong to the international family. Our foreign policy is defined with clarity, a hand building from within, and a hand offered in goodness, giving, continued participation in the world’s events and development.”