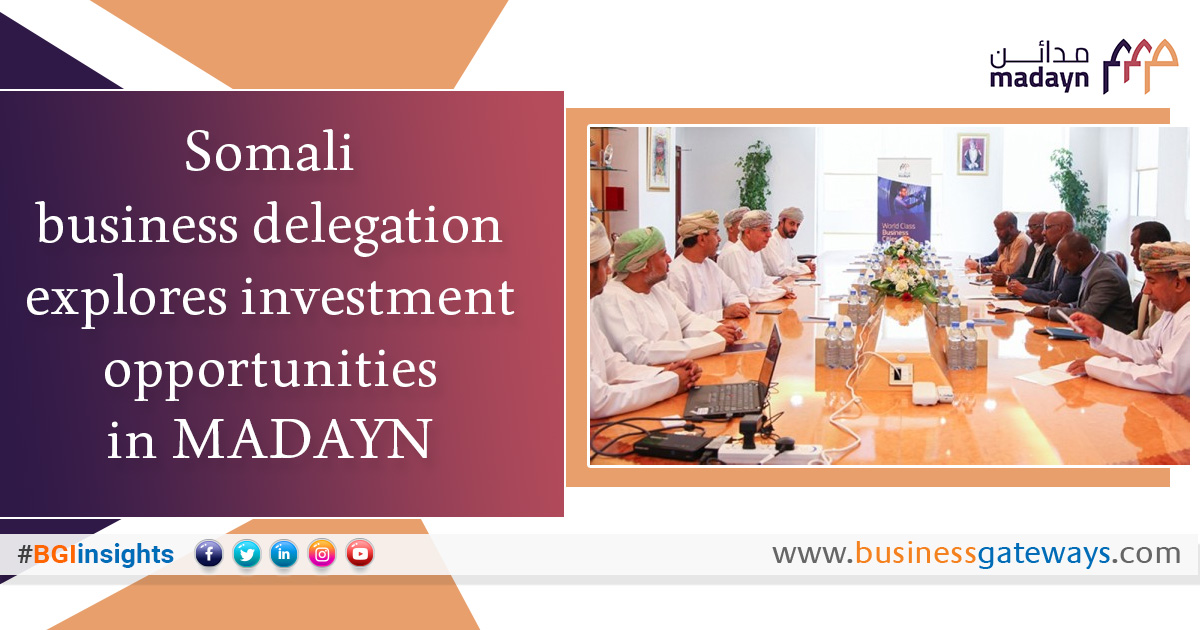 A delegation representing the Ministry of Commerce and Industry in Somalia and a number of Somali businessmen visited on Tuesday the headquarters of the Public Establishment for Industrial Estates – Madayn at the Knowledge Oasis Muscat. The delegation was received by Hilal bin Hamad Al Hasani, Chief Executive Officer of Madayn.

The CEO of Madayn briefed the Somali delegation on the investment climate in the Sultanate, and the current investment opportunities in Oman in general and in Madayn’s industrial cities in particular. He elaborated on the vision of Madayn in enhancing the Sultanate’s position as a leading regional centre of manufacturing, ICT, innovation and entrepreneurship excellence, and its mission in attracting industrial investments and providing continued support, through regionally and globally competitive strategies, good infrastructure, value-adding services, and easy governmental processes.

Al Hasani also highlighted the objectives of Madayn which include attracting foreign investments to the Sultanate and localising the national capital; contributing to stimulating the private sector to achieve sustainable economic and social development; achieving environmental sustainability, and contributing to the creation of new job opportunities for the national cadres.

On his part, Khalid bin Sulaiman Al Salhi, Director of Marketing and Promotion at Madayn, delivered a presentation on the available investment opportunities in the various industrial cities under Madayn. He pointed out that the development project of Samail Industrial City is nearly completed on an area of more than 7.5 million sqm, and the 7th phase of Sohar Industrial City covers an area exceeding 21 million sqm; which will provide significant investment opportunities in various sectors.

The delegation was also familiarised with the National Business Centre (NBC), which is an initiative launched by Madayn in KOM to offer promising Omani entrepreneurs a platform to develop their business ideas and advance them into growing ventures. NBC offers intensive training, coaching and mentoring to the incubated companies to enhance their entrepreneurial skills through a cutting-edge environment that allow the companies to flourish, network, form partnerships, and have access to business mentors.

The delegates were also briefed on Al Rusayl Industrial City, which was established in 1983 under the name of Al Rusayl Industrial Estate Authority. The success story of the authority contributed to the establishment of Madayn in 1993. Madayn today manages and operates seven industrial cities in Sohar, Raysut, Nizwa, Sur, Al Buraimi, Al Rusayl, Samail, in addition to the Knowledge Oasis Muscat and Al Mazunah Free Zone.