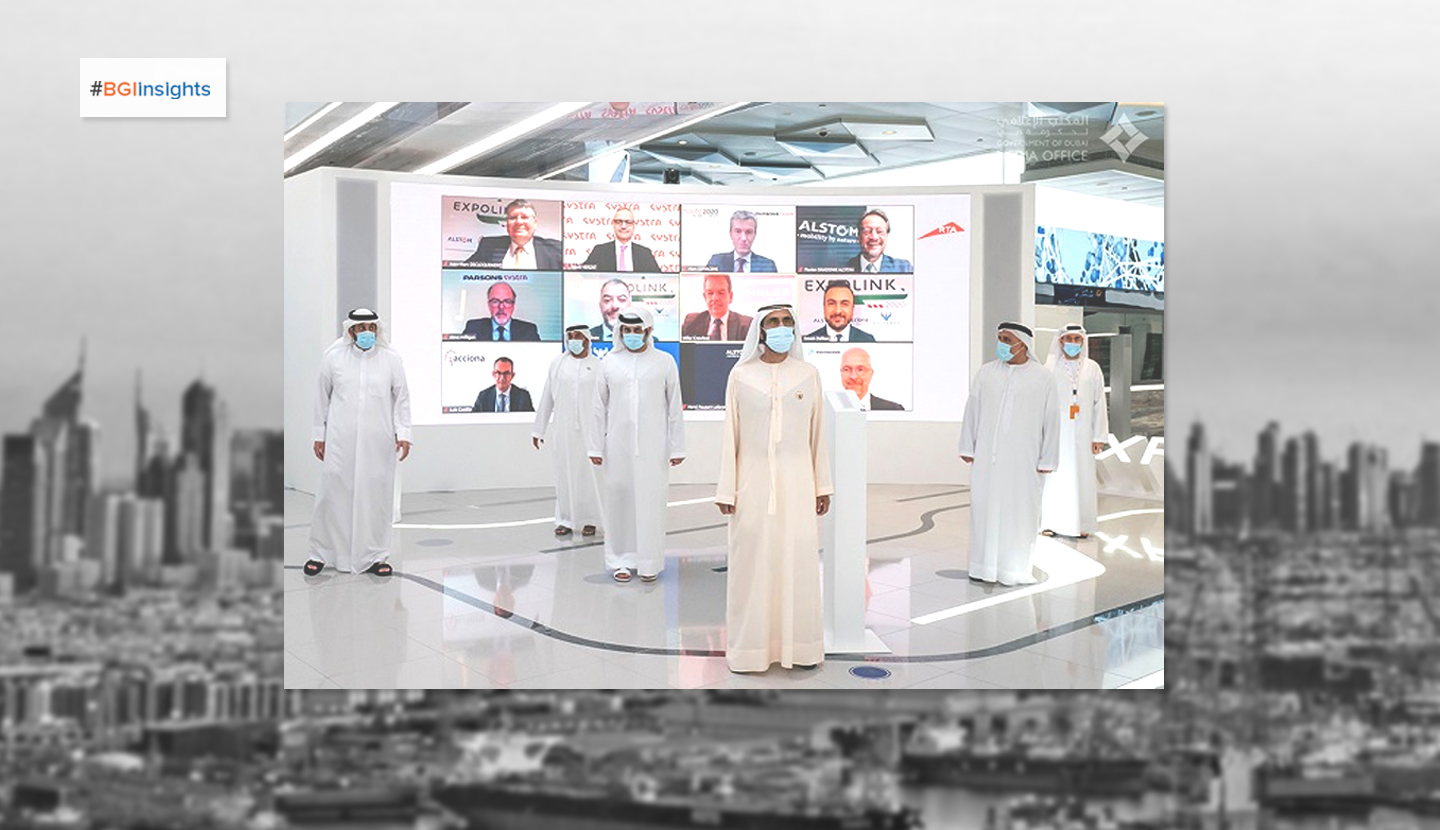 HH Sheikh Mohammed bin Rashid Al Maktoum, Vice President, Prime Minister and Ruler of Dubai, has officially inaugurated the operations of AED11 billion ($2.9 billion) Route 2020 project, which involves the 15 km extension of the Dubai Metro Red Line from Jebel Ali Station to Expo 2020 linking seven stations. It will be open to the public in September this year.

Upon arrival at Jebel Ali Metro Station, Sheikh Mohammed was welcomed by Mattar Mohammed Al Tayer, Director-General and Chairman of the Board of Executive Directors of Roads and Transport Authority (RTA).

At the station, Sheikh Mohammed and his entourage watched a video about the Route 2020 Project built as part of the leadership’s vision to promote the sustainable development of the emirate. The project was focused on building globally benchmarked infrastructure and services that meet the UAE’s aspirations themed ‘Towards the Next 50 Years’.

The video shed light on the communities served by Route 2020, such as The Gardens, Discovery Gardens, Al Furjan, Jumeirah Golf Estates, Dubai Investment Park and the Expo 2020 site; which have a combined population of about 270,000.

The project offers safe and smooth transport for Expo visitors and residents of Dubai communities. It is also viewed as a vital future link between several Dubai communities and Al Maktoum International Airport. The new project serves as a symbol of sustainability, progress, and innovation for present and future generations.

Speaking on the occasion, Sheikh Mohammed said the UAE’s journey towards sustainable development is backed by quality projects and an infrastructure that is globally acclaimed for its efficiency and reliability.

"Developed by Emirati talent with the support of international expertise, these projects meet the highest global standards as part of the objective of providing a superior quality of living and services for everyone," he noted.

"The UAE has exceptional goals and ambitions. Today, we are moving with confidence, determination and a clear vision to attain the highest levels of excellence in various fields. Our objective is to provide people everything that ensures their wellbeing, stability and happiness and establish a prosperous future for the coming generations,": said Sheikh Mohammed.

"The world is today entering a new phase which brings unprecedented challenges that some may not be prepared to deal with. However, we have a strategy designed to tide over unforeseen challenges and create a positive future. Our nation is equipped with the plans, competencies and expertise needed to navigate these challenging global circumstances. We have the ability to overcome all obstacles while sustaining our progress and generating new opportunities," he added.

Sheikh Mohammed later toured Jebel Ali Station, an interchange station that spans 8,800 sq m in area with total capacity of 320,000 riders per day. He boarded the new metro train, which features some modifications to the interior design of the metro carriages.

The train stopped at Expo 2020 Station, which boasts a unique design featuring the wings of an aircraft, signifying Dubai’s future drive towards greater innovation. The station has three passenger platforms and three routes.

Lauding the achievement, Al Tayer said RTA will open Route 2020 for the public this September.

Through the metro operator, RTA will continue the operational tests and trials over the following months. The test-run comprises of four phases; the first is the Static Test, where a motionless metro carriage will be placed on the track for carrying out a series of tests.

Tests include communication systems, automated operation systems, electrical systems, air-conditioning, onboard electronic devices, lighting systems as well as motoring and braking equipment and the integration between various subsystems and components, he stated.

According to him, work is currently underway on the second phase of mobile testing, which consists of a series of tests on a train in motion without passengers.

RTA will shortly embark on Phase 3 of operational tests to verify system reliability and stability. These tests are key phases of the project and start after the completion of tests and integration of the entire systems. During this phase, the system will be running continuously in a mode similar to the normal revenue operation, but without passengers, with the aim of achieving the targeted operational performance indicator (KPI).

Phase 4 features a trial run to be conducted by the operator aimed at verifying the readiness of the operator before the start of actual service operations. The trial includes 14 days of operations without riders to test the various components of the metro system in all modes including normal, degraded and emergency.

The exterior designs of Route 2020 stations feature an enhanced version of the architectural design of existing metro stations along with the Red and Green Lines. Such designs include four variations. The iconic Expo station features plane wings symbolising Dubai’s future aspirations and its focus on innovation.

The interchange station between Route 2020 and the Red Line at Jebel Ali Station has a design similar to that of current metro stations in order to maintain overall design identity. The other two patterns are for elevated and underground stations. The new designs allow for bigger capacities compared with the existing stations on the Red Line, besides design elements signifying simplicity, modernity and sustainability.