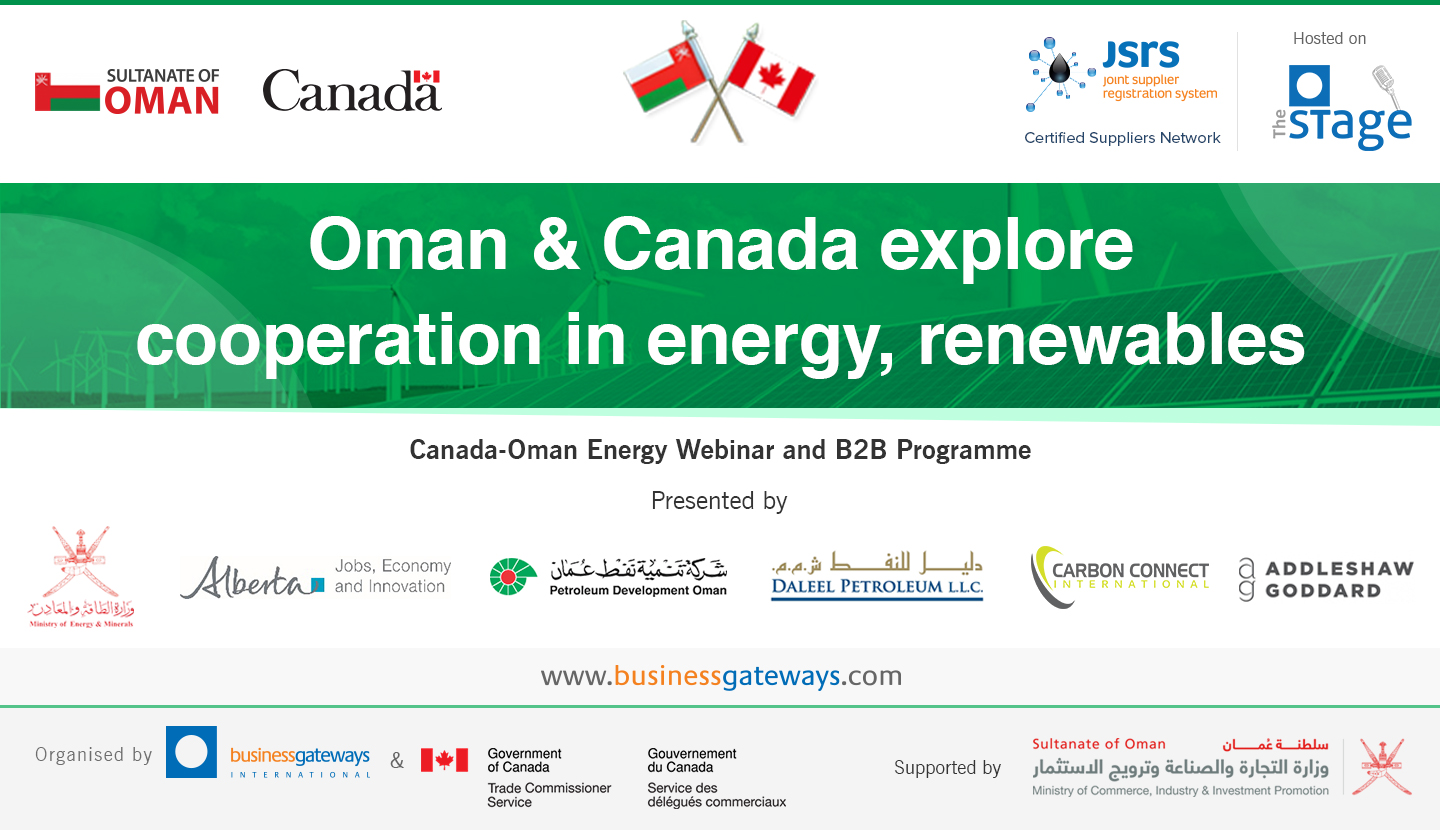 Showcasing its promising renewable energy potential, Oman has urged global energy powerhouse Canada to consider investing in clean energy projects, among other economic sectors that are at the heart of the Sultanate’s long-term vision for growth.

Asila bint Salim al Samsamiyah, Under-Secretary for Investment Promotion at the Ministry of Commerce, Industry and Investment Promotion, said the Sultanate was open for investment in the manufacturing, agriculture, fisheries, mining, logistics and tourism sectors, besides energy.

“The Sultanate is striving steadily towards attracting and retaining inward and facilitating the business environment, and as part of Oman Vision 2040, we want the Sultanate to be a place where business can grow, succeed and thrive; we want it to be a place where great ideas and innovation are turned into great products and services,” she remarked.

Speaking at opening of the ‘Canada-Oman Energy Webinar and B2B Programme’ held here recently, the under-secretary noted that FDI inflows into the Sultanate had risen 8.7 per cent to RO 15.86 billion at the end of Q3 2020, effectively placing Oman on “the fast track towards economic progress”.

“Today, we are proud to say that Oman is taking great steps towards achieving the goals of Oman Vision 2040, which includes among its priorities, economic diversification, encouragement and facilitation of FDI, and strengthening of the role of private sector in contributing to the economy,” Al Samsamiyah noted.

In setting its sights on long-term growth, Oman is also capitalising on its “first class roads, which are recognised as among the best in the world, the award winning airports, state-of-the-art deep-water ports, flourishing industrial estates, free zones, technology parks and Free Trade Agreements”, she further stated.

More recently, the Sultanate has embarked on a strategy to harness solar and wind energy with the goal of generating at least 30 per cent of its electricity requirements from renewable resources by 2030, she said.

Inviting Canadian firms to be part of this promising future, the under-secretary added: “Going forward, I fully expect to see more international and domestic collaboration in the clean technology value chain, especially in equipment manufacturing, installation, civil works, retail, maintenance and R&D. We welcome Canadian interest and involvement in Oman’s renewables sector, helping the Sultanate to achieve the ambitions set out in its National Energy Strategy.”

“Canada’s energy sector has developed into a world-class energy sector operating under a strict set of rules and regulations that have been put in place to protect the environment. This has resulted in the development of expertise that Canada can now export around the world,” he said.

“It is obvious there is much room to grow bilateral trade in both goods and services,” Page noted.

The webinar was organised by Business Gateways International, a Muscat-based IT-services firm that also operates the Joint Suppliers Registration System (JSRS) on behalf of the Ministry of Energy and Minerals. Also present were representatives of the Government of Alberta, Carbon Connect, Petroleum Development Oman (PDO), Daleel Petroleum and Addleshaw Goddard.