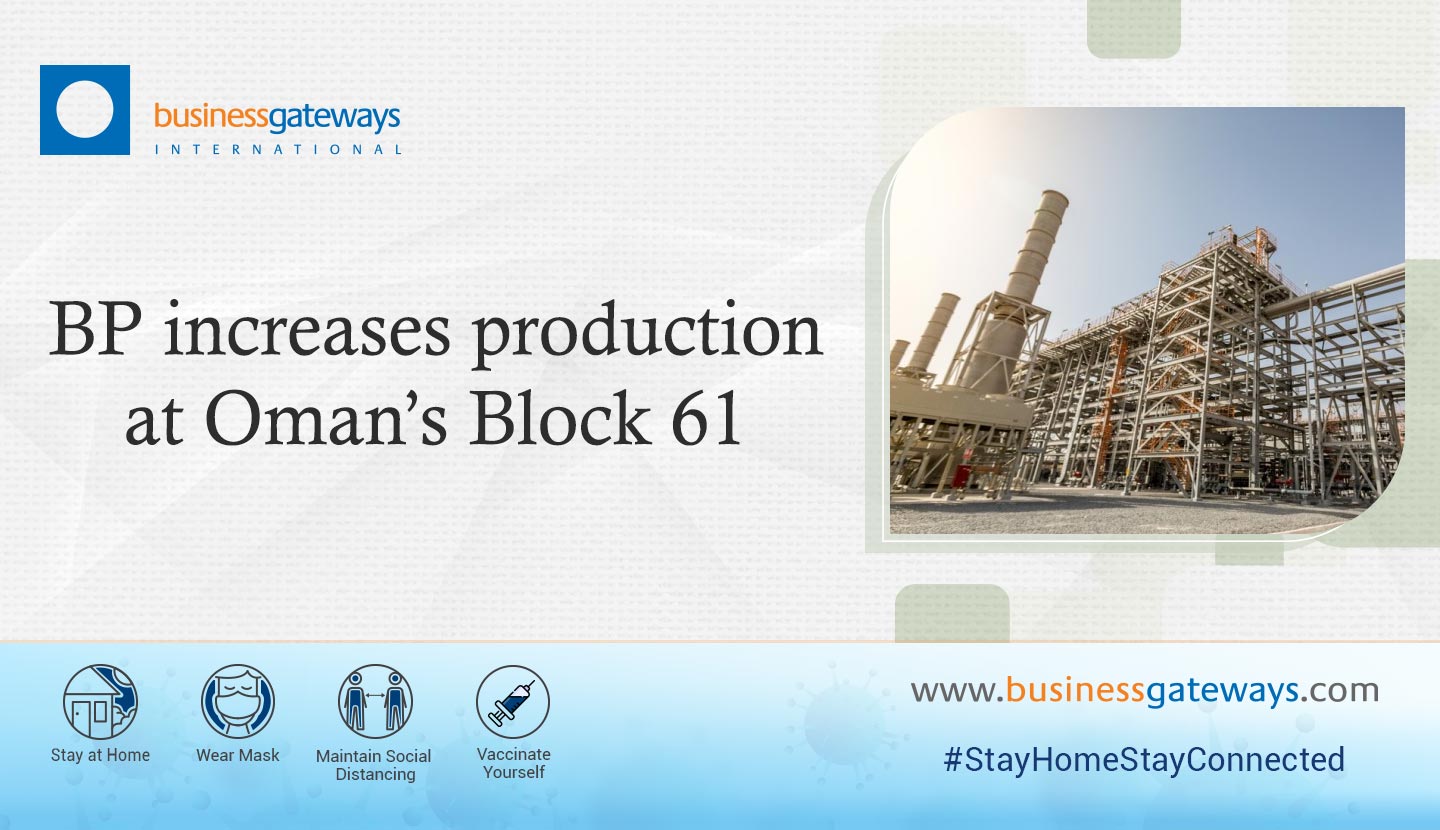 BP, in partnership with OQ, PTT Exploration and Production Public Company Limited (PTTEP), PETRONAS and the Ministry of Energy & Minerals, has announced that it has significantly increased production from the Block 61 gas field in central Oman. Gas production has increased to 1.5 billion cubic feet per day (bcf/d), from its current level of around 1bcf/d.

Associated condensate production is also expected to rise. The increase will generate value for the Oman government and Block 61 partnership. bp-operated Block 61 was developed in two stages – Khazzan, which began production in 2017, and Ghazeer that started up last year.

It is a high-quality, highly efficient development, designed from the outset to incorporate a number of lower emissions technologies. bp Oman president Yousuf Al Ojaili commented: “bp is building a balanced portfolio that will continue to generate both cash and value as we transform from an international oil company to an integrated energy company.

A core part of this strategy is our resilient and focused hydrocarbons business, of which Block 61 is an excellent example, offering stable, long-term returns.

“We are committed to supporting the sustainable development of Oman’s economy and are proud of our strategic partnership with the Sultanate. Gas from Block 61 is a key part of the integrated energy value chain and will play a core role in Oman’s future development. We appreciate the collaborative support we have received from the Oman government and our partners in delivering this increase in production.”

With an estimated 10.5 trillion cubic feet of recoverable gas resources, Block 61 supplies over 30% of Oman’s total gas demand. Gas from Block 61 is distributed for domestic consumption - industrial and power - through Oman’s national gas grid and is used as fuel for power plants, and feedstock to industries and to Oman LNG. BP prioritises in-country value throughout its operations.

During the development of Block 61, bp has worked closely with local vendors to develop their capabilities and help them be competitive both in Oman and globally, resulting in a number of contracts and technical scopes moving from international to local Omani contractors. Updated, industry-leading policies and procedures on workers’ welfare and human rights have also been embedded throughout the development. At the end of 2020, Omanization in bp Oman reached around 85% and Block 61 spend with Omani-registered companies exceeded $610 million.

BP has had an upstream presence in Oman since 2007.

2016: BP signed an agreement with the Government of the Sultanate of Oman to amend the Block 61 Exploration and Production Sharing Agreement (EPSA). This added a further 1,150km2 to the south and west of the original 2,800km2 Block 61 development, allowing a second phase of development, Ghazeer. o Sept 2017: first gas from Block 61 Phase 1 Khazzan project delivered ahead of schedule.

Jan 2019: bp and ENI sign heads of agreement with the Government of the Sultanate of Oman to work jointly towards a significant exploration opportunity in Block 77. Six months later an EPSA was signed.

March 2020: Royal decree permits exploration activities in Block 77 to progress, including seismic data processing and the drilling of one exploration well within the next three years.

Oct 2020: First gas from Ghazeer delivered ahead of schedule.

Block 61 is one of the Middle East’s largest tight gas accumulations, in which gas lies at depths of up to five kilometres in narrow bands of hard, dense rock. bp is a pioneer in tight gas and has applied its technology and expertise to develop this resource.

Development: The development of Block 61 (Khazzan and Ghazeer) comprises a three-train central gas processing facility; a water treatment plant; 400km of gas and condensate export pipelines; a waste management area; an electricity substation; almost 500km of roads; and over 60km of water pipelines. 132 wells have been drilled, with more planned over the lifetime of the project.

Reducing emissions: Applying lessons learned from onshore operations in the US, Block 61 wells are tested using the ‘green completions’ concept, which sends hydrocarbons during testing to a production facility instead of flaring them. Since adopting this approach in 2019, 201,000 tonnes of CO2e emissions have been eliminated – equivalent to removing 44,000 cars from the road for a year.

BP is also focused on identifying and eliminating methane emissions. A state-of-the-art methane fugitive emissions technology, which has the ability to identify very small gas releases, has been piloted at Block 61.

Distribution: Gas from Block 61 is distributed for domestic consumption via Oman’s national gas grid, while also boosting the availability of feedstock supply for Oman LNG. bp Trading and Shipping purchase 1.1 million tonnes a year of LNG from Oman LNG under a seven-year deal that started in 2018.