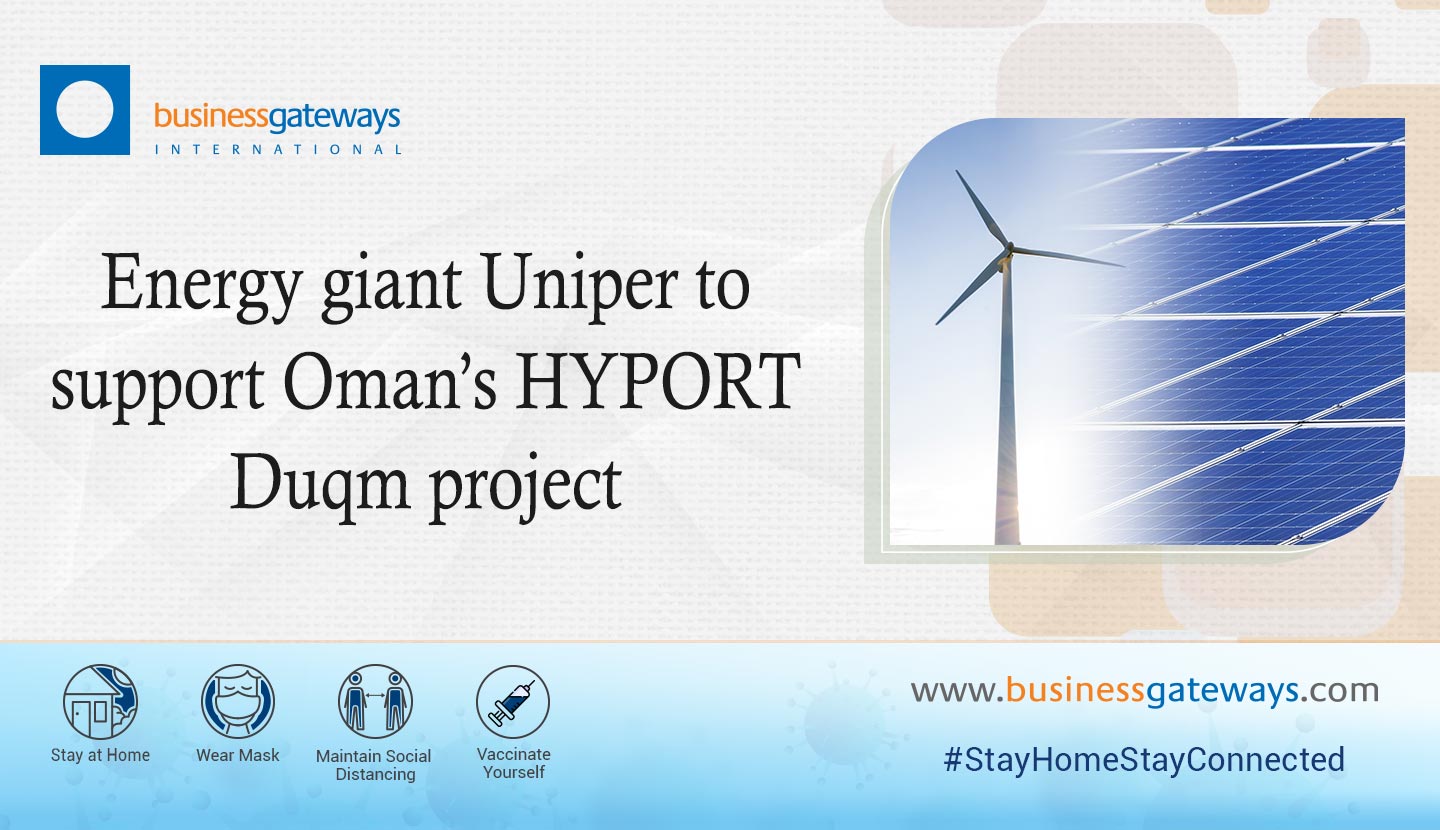 This agreement brings us a step closer to delivering a world scale green Hydrogen facility in the Special Economic Zone at Duqm and showcases the true potential of Oman’s renewable capabilities as well as the critical role that the country can play as a net energy exporter DR SALIM AL HUTHAILI CEO, OQ Alternative Energy.

New milestone: Under the cooperation pact, Uniper will provide engineering services and negotiate an exclusive agreement covering the offtake of green ammonia.

Oman’s strategic green hydrogen project, HYPORT Duqm, has signed a cooperation agreement with energy giant Uniper. Under the cooperation, Uniper will be joining the project team to provide engineering services and negotiate an exclusive offtake agreement of green ammonia.

With Uniper, HYPORT Duqm’s shareholders DEME Concessions and OQ Alternative Energy have onboarded a globally recognised and reputable partner, which will support HYPORT Duqm in demonstrating a strong business case for the offtake, and in turn, enable them to secure optimal financing for the project.

This agreement marks another important milestone for HYPORT Duqm, after having secured its 150 km² renewable generation site in the Special Economic Zone at Duqm, Oman earlier this year.

The site is being prepared for the deployment of a series of meteorological masts to confirm Duqm’s excellent solar and wind conditions which are available throughout the year and that form the basis of successful green hydrogen to green ammonia project.

In the first phase, the HYPORT Duqm project will develop a 250 to 500 MW green hydrogen facility in the Special Economic Zone at Duqm.

The facility is planned to come into operation in 2026 and will respond to the global demand for green hydrogen and its derivatives.

Future expansions are foreseen in subsequent phases, whereby a further scaling up of the value chain will transform the Special Economic Zone into a Green Hydrogen hub in Oman and the wider region.

HYPORT Duqm showcases the development of a complete green hydrogen value chain, from the installation of up to 1.3 gigawatt-peak (GWp) of renewable power generation capacity from solar and wind (Phase 1), via the electrolysis-based hydrogen production to the synthesis of green ammonia. HYPORT Duqm will connect to Port of Duqm’s brand-new export terminal, storage infrastructure and liquid jetties and will use Port of Duqm as its gateway to deliver competitive decarbonised molecules to users worldwide.

Luc Vandenbulcke, CEO DEME Group, underlines: “DEME Group has always been at the forefront of sustainable solutions on a global scale. The United Nations’ Sustainable Development Goals are the compass to our present and future activities.

With HYPORT Duqm, DEME is proud of taking the initiative in the global energy transition whereby green hydrogen has been identified as one of the major energy vectors.

This project will not only contribute to the challenging European ambitions to reduce CO2 and GHG emissions (as expressed in the Green Deal and Fit for 55 objectives), but will also strengthen Oman and the Sultanate’s visionary future.”

This brings us a step closer to delivering a world scale green Hydrogen facility in the Special Economic Zone at Duqm and showcases the true potential of Oman’s renewable capabilities as well as the critical role that the country can play as a net energy exporter.

This agreement will pave the way to further cooperation between OQ Alternative Energy, DEME Concessions and Uniper moving us to the engineering phase of the project. Uniper’s expertise coupled with that of DEME Concessions and OQ Alternative Energy will ensure that HYPORT Duqm is provided with the necessary talent and tools to take us through the engineering phase.”

Niek den Hollander, Uniper CCO, says: “We need to get hydrogen out of the laboratory and start using it in large-scale applications and marketable industrial solutions — we should turn it into a market and exploit its wide variety of uses.

One way of achieving this is to import green ammonia and convert it into hydrogen, which is something we are looking at for Wilhelmshaven on Germany’s North Sea coast. Germany will be heavily dependent on imports if we want to use hydrogen to help us achieve our climate goals.”

Engagements like this one in the Middle East offer Uniper the opportunity to enter into green hydrogen projects that can potentially take advantage of some of the world’s lowest LCOEs, thereby delivering cost-competitive hydrogen or its derivatives, such as green ammonia, to Germany and Europe.

With Uniper as the offtake partner for green ammonia, the partnership will benefit from the additional value-added through Uniper’s global commodity trading network.”