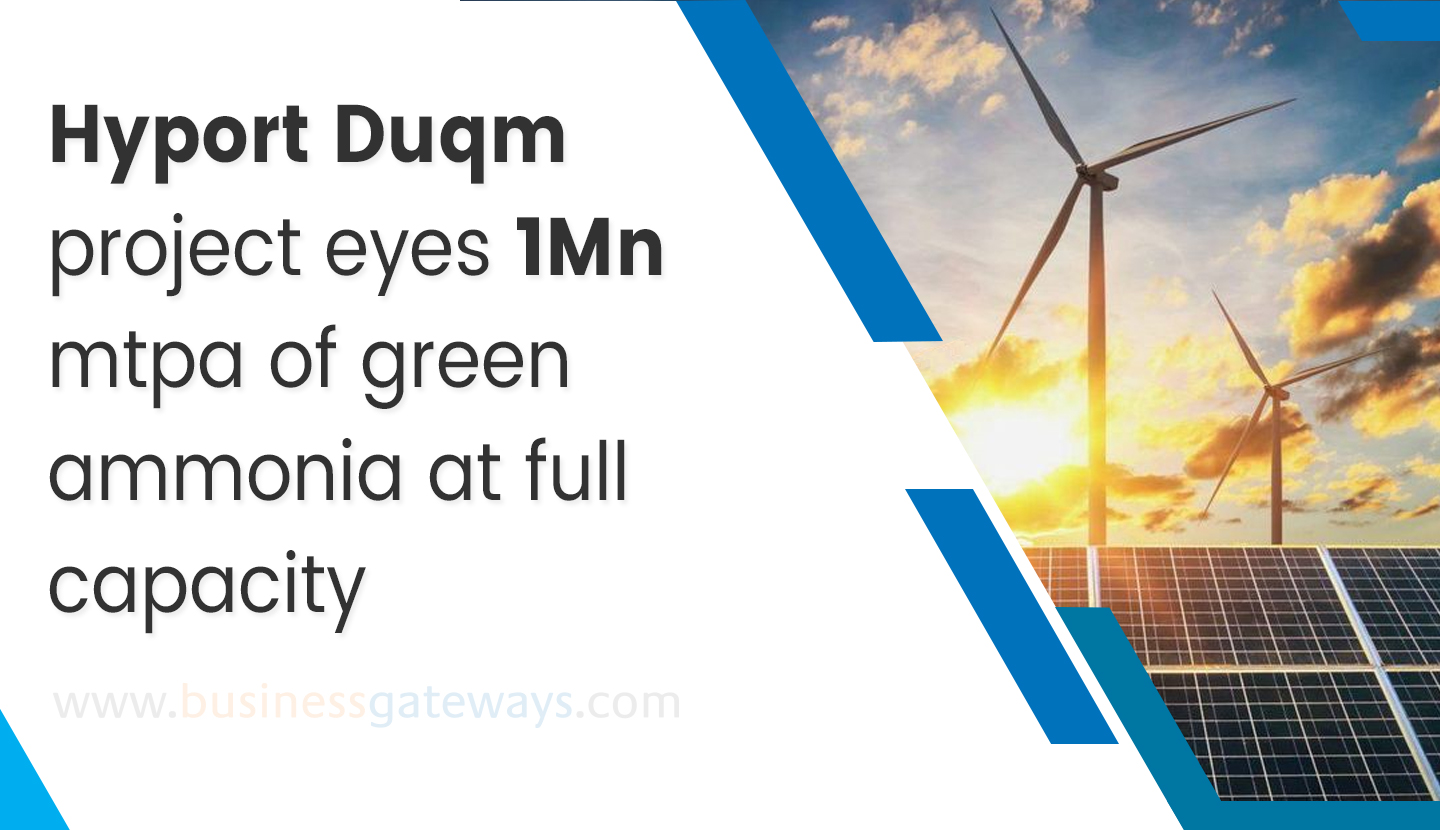 A utility-scale green hydrogen project due to be launched in the coming years at the Special Economic Zone (SEZ) in Duqm is anticipated to yield 1 million metric tons per annum (mtpa) of green ammonia when it is fully built, according to the venture’s key partners. Hyport Duqm – a partnership of OQ (the globally integrated energy group of the Sultanate of Oman) and DEME Concessions (the renewable energy and offshore marine infrastructure arm of Belgium’s DEME Group) – is set to be the first of many world-scale, green hydrogen projects slated to come on stream in the country over next couple of decades.

According to key officials representing the principal shareholders, Hyport Duqm – when fully developed over multiple phases – will boast a production capacity of around 1 million mtpa of green ammonia. This represents a three-fold increase from the project’s Phase 1 capacity of 330,000 mtpa of green ammonia – a stable commodity that can be shipped globally for use as fertilizer or for reconversion into green hydrogen or an array of green chemicals or other derivatives. Sharing details about the mega project at a recent green energy summit held in the city, Anwar al Battashi, OQ’s Project Lead on Hyport Duqm, and Jean-Baptiste De Cuyper, Project Lead from DEME Concessions, said the landmark venture will be predominantly export-oriented.

“We are developing a sustainable business for Oman and for the world,” said OQ’s Anwar al Battashi. “We are meeting the aspirations of Oman Vision 2040 with regard to renewable energy production, and diversification of the economy. We will also have excess power that we will be able to sell back to the grid.” DEME Concession’s De Cuyper stated: “We are building the full value chain at Duqm: from the electron all the way to the green molecule. We are building quite a substantial renewable asset base, which will be a combination of solar and wind. Right now, we are trying to develop the best ratio between solar and wind.”

According to the executives, the upstream component of Hyport Duqm, featuring arrays of solar and wind farms, will come upon 150 sq kilometres of land leased to Hyport Duqm within the SEZ. Renewable energy from this upstream component will be supplied to electrolysers representing the midstream component located closer to the Port of Duqm. Supplying this green electricity will be a dedicated connection to ensure the ‘green label’ of the energy being used to produce green hydrogen and eventually green ammonia, they stressed. Phase 1 of Hyport Duqm envisions investments in 1.3 GW of renewable solar and wind capacity necessary to operate a 500 MW electrolyser to produce an estimated 60,000 mtpa of green hydrogen.

This will yield 330,000 mtpa of green ammonia for export. However, upon the optimal utilisation of all 150 sq km of land leased for the project, renewable energy generation capacity can be ramped up to 3 GW which, in turn, can power 1.5 GW-capacity electrolysers to produce 1 million mtpa of green ammonia. German-based international energy corporation Uniper has been roped in by Hyport Duqm to secure offtake agreements for the project’s green ammonia output. This effort will be supplemented by OQ’s Trading Arm, OQ’s Project Lead added. A final investment decision (FID) on Hyport Duqm is slated during 2023, with Phase 1 of the project targeted for start-up in 2026.