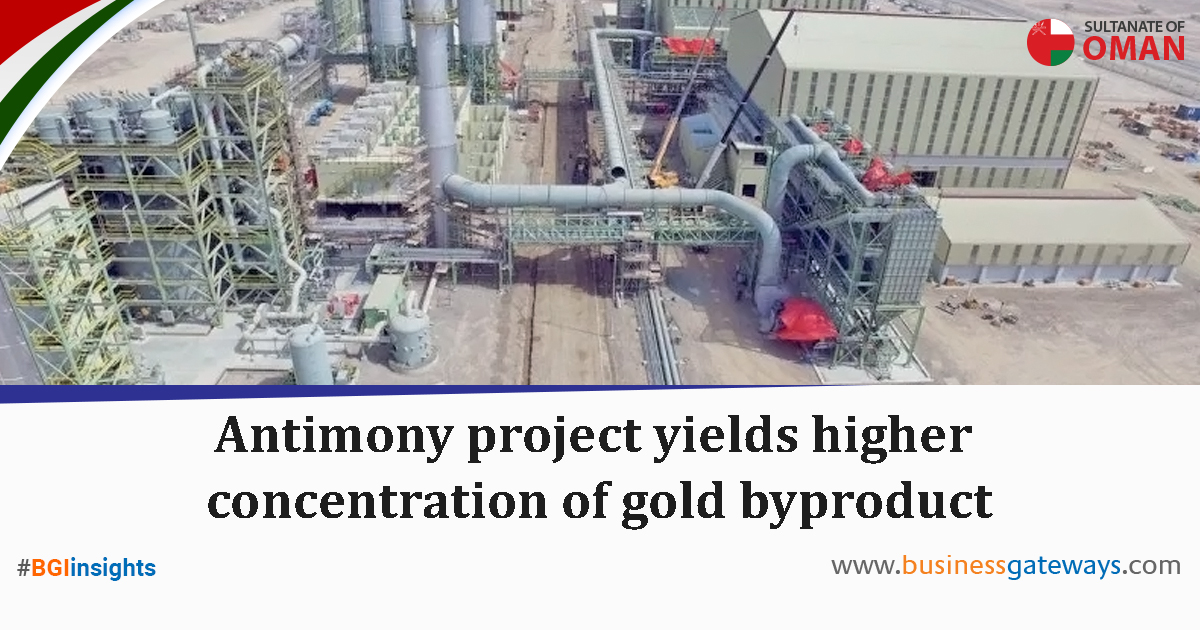 An antimony project, currently in the early stages of operation at Sohar Free Zone, has reported rising concentrations of gold as a byproduct of its operations – an outcome that will enhance the profitability of the project. Purity levels of gold dore – a semi-pure alloy that needs to be further purified in a refining process – have reached five per cent, making it a commercially marketable commodity, according to a key shareholder in the antimony roaster project set up by Strategic & Precious Metals Processing LLC (SPMP).

This uptick in gold concentration will put the project on target to achieving an output in excess of 50,000 ounces (560 kilos) of gold per annum, said London-based Tri-Star Resources, a 40 per cent investor in SPMP. The antimony roaster – billed as the world’s first ‘clean plant’ designed to EU environmental standards, as well as the largest antimony manufacturing facility outside of China – is preparing to ramp up output at its site in Sohar Free Zone, adjoining Sohar Port. Production of antimony commenced in July.

Last week, Tri-Star Resources also announced that purity levels of antimony – a strategically important metal used in a number of commercial applications – have climbed to 99.5 per cent. This would effectively open up demand for Omani-produced antimony from the thriving acid battery industry, it said. “Reaching purities of 99.54 per cent and 5 per cent respectively for antimony and gold is a major step in the development of this exciting project,” said Adrian Collins, Chairman of Tri-Star. “Notably, at this concentration level, which is edging closer to our near-term target 99.65 per cent, antimony can be sold into the acid battery market. Additionally, SPMP is now producing saleable quantities of gold dore, the purity of which also continues to improve.”

The project is targeted to produce around 20,000 tonnes in combined antimony metal and antimony trioxide (ATO) per annum, which is used in the industrial, electronics and plastics sectors. Oman Investment Fund (OIF) – a sovereign wealth fund of the Sultanate is a 40 per cent equity partner in the project, while DNR Industries Limited, part of Dutco Group in Dubai, is a 20 per cent equity holder.